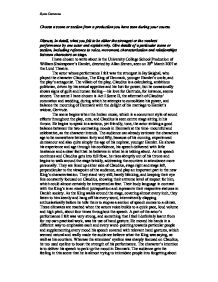 (Based on a performance of Hamlet)Discuss, in detail, what you felt to be either the strongest or the weakest performance by one actor and explain why. Give details of a particular scene or section, including reference to voice, movement, characterization

Choose a scene or section from a production you have seen during your course. Discuss, in detail, what you felt to be either the strongest or the weakest performance by one actor and explain why. Give details of a particular scene or section, including reference to voice, movement, characterization and relationships between characters on stage. I have chosen to write about is the University College School Production of William Shakespeare's Hamlet, directed by Allan Steven, seen on 29th March 2007 at the Lund Theatre. The actor whose performance I felt was the strongest is Jay Saighal, who played the character Claudius, The King of Denmark, younger Hamlet's uncle, and the play's antagonist. The villain of the play, Claudius is a calculating, ambitious politician, driven by his s****l appetites and his l**t for power, but he occasionally shows signs of guilt and human feeling-his love for Gertrude, for instance, seems sincere. The scene I have chosen is Act I Scene II, the aftermath of Claudius' coronation and wedding, during which he attempts to consolidate his power, and balance the mourning of Denmark with the delight of his marriage to Hamlet's widow, Gertrude. ...read more.

A part of the actor's performance I felt was very strong, and something that I feel I definitely learnt from for my own practical work, was his use of hand gesture. He moved his hands in a different way to emphasize each and every word- pointing towards particular people and supplementing every mood his speech covered with relevant hand gestures, which seemed natural and really made the audience believe what the King was saying, as well as his courtiers. Whereas the attendees' eyeline was sharply focused on Claudius, he too used eyeline to boost the strength of his performance. The character's intention is to deliver his speech to perk up the mood in Denmark. The audience gets the feeling in this scene that he is almost trying to intimidate people into forgetting about elder Hamlet, which he does by moving his eyes very shiftily from one person to another, a very persuasive technique, giving his speech a personal feel for all of those in attendance. He mentions that young Fortinbras has written to him, rashly demanding the surrender of the lands King Hamlet won from Fortinbras' father, and dispatches Cornelius and Voltimand with a message for the King of Norway, Fortinbras' elderly uncle. ...read more.

He wants elder Hamlet to be forgotten as quickly as possible, for him to get on with his reign swiftly, and for the attention of the kingdom to be distracted away from his marriage to his brother's widow. As he speaks to Hamlet, his warmth seems pretentious, glancing down pensively at the floor every few seconds, as if his guilt keeps catching up with him, and his relaxed posture and gesture seem intentionally forced by Claudius. As he speaks to Hamlet he occasionally goes and sits next to his new wife and holds her hand or embraces her, as if to say that despite any initial misconceptions made about the speed and manner of their marriage, that it was good for Gertrude and that Hamlet should be happy for him. However, this again seems like a fa�ade, his actions and Gertrude's reactions too frequently unnatural and overemphasized. In review, the performance of Jay Saighal in this scene was fantastic. I found every aspect of what he did spot on, leaving a brilliant first impression of Claudius in my mind, which was vital to my understanding and enjoyment of the plot of the play. Ryan Corcoran ...read more.