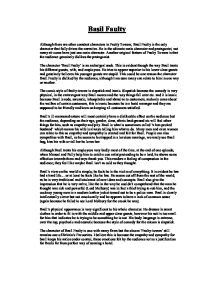 Basil Faulty Although there are other constant characters in Faulty Towers, Basil Faulty is the only character that fully drives the narrative. He is the ultimate main character and protagonist, not many sit-coms have just one main character. Another original feature of Faulty Towers is that the audience genuinely dislikes the protagonist. The character 'Basil Faulty' is an archetypal snob. This is evident though the way Basil treats his different guests, wife, and employees. He tries to appear superior to his lower class guests and genuinely believes his younger guests are stupid. This could be one reason the character Basil Faulty is disliked by the audience, although I am sure many can relate to him in one way or another. ...read more.

Many men and even women can relate to this so empathy and sympathy is created and felt for Basil. People can also sympathise with Basil, as he seems to be trapped in a loveless marriage, we rarely see Basil hug, kiss his wife or tell her he loves her. Although Basil treats his employees very badly most of the time, at the end of one episode, when Manuel and Polly help him to catch a con artist pretending to be a lord, he shows some affection towards them and says thank you. This renders a feeling of compassion in the audience; they feel like maybe Basil isn't as cold as they thought. ...read more.

Basil's physical appearance is very significant to his whole character. He dresses in smart clothes in order to fit in with the middle and upper class guests, however his suit is too small for him that indicates he is trying to be something he is not. His body language is extreme, over the top, psychotic and neurotic because the style of comedy for the sitcom is slapstick. The character of Basil Faulty is one with many flaws but the sitcom 'Faulty towers' still remains one of Britain's Favourites. I believe this is because the empathy and sympathy for basil keeps his antics under control, these emotions felt by the audience act as a justification for Basils far from perfect way of running a hotel. ...read more.