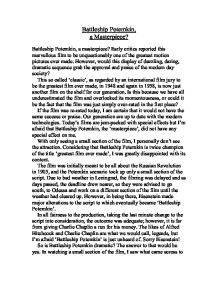 Battleship Potemkin, a Masterpiece? Battleship Potemkin, a masterpiece? Early critics reported this marvellous film to be unquestionably one of the greatest motion pictures ever made. However, would this display of dazzling, daring, dramatic sequence grab the approval and praise of the modern day society? This so called 'classic', as regarded by an international film jury to be the greatest film ever made, in 1948 and again in 1958, is now just another film on the shelf for our generation. Is this because we have all underestimated the film and overlooked its momentousness, or could it be the fact that the film was just simply over-rated in the first place? If the film was re-rated today, I am certain that it would not have the same success or praise. ...read more.

However, in being there, Eisenstein made major alterations to the script to which eventually became 'Battleship Potemkin'. In all fairness to the production, taking the last minute change to the script into consideration, the outcome was adequate; however, it is far from giving Charlie Chaplin a run for his money. The likes of Alfred Hitchcock and Charlie Chaplin are what we would call, legends, but I'm afraid 'Battleship Potemkin' is just unheard of. Sorry Eisenstein! So is Battleship Potemkin dramatic? The answer to that would be yes. In watching a small section of the film, I saw what came across to be a flock of over-dramatic fear-struck people running around frantically from some very robotic looking soldiers. ...read more.

Here again, it is not a film to be taken seriously. Realistically, a pram carrying a child cannot roll down masses of steps unaided, without tipping over at some point on the way down. I am not completely critical of the film as I did find that the lighting and colour worked well. After all, the black and white images lowered the tone which gave less detail to the over dramatized expressions on the actors faces. The fact of the matter is; the producers and makers of this film would have no room to be boastful here in the 21st century as film critics would have a field day marking out Battleship Potemkin's weak points. I think that it is fair to say that Battleship Potemkin is no longer the highly rated masterpiece that it once was. ...read more.