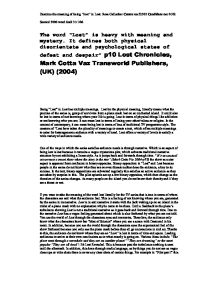 Being &quot;Lost&quot; in Lost has multiple meanings. Lost by the physical meaning, literally means what the premise of the series is, group of survivors from a plane crash lost on an uncharted island. It could also be lost in terms of

The word "Lost" is heavy with meaning and mystery. It defines both physical disorientate and psychological states of defeat and despair" p10 Lost Chronicles, Mark Cotta Vaz Transworld Publishers, (UK) (2004) Being "Lost" in Lost has multiple meanings. Lost by the physical meaning, literally means what the premise of the series is, group of survivors from a plane crash lost on an uncharted island. It could also be lost in terms of not knowing where your life is going. Lost in terms of physical things like addiction or not knowing who you are. It can mean lost in terms of losing your ethos/values or religion. In the context of contempary, it can mean being lost in terms of loss of traditional TV programme style. The creators of "Lost have taken the plurality of meanings to create a text, which offers multiple meanings to cater for heterogeneous audience with a variety of need. Lost offers a variety of levels to satisfy a wide variety of audience needs. One of the ways in which the series satisfies audience needs is through narrative. Which is an aspect of being lost is lost because it contains a vague mysterious plot, which subverts traditional narrative structure by not exhibiting a linear style. As it jumps back and forwards through time. "It's an unusual occurrence a smart show where the story is the star" (Mark Cotta Vaz 2004-p73) the show as a star aspect is apparent from confusion in binary opposites. Binary opposition in "Lost" and Lost because people in the series do not know who they are or even threats neither does the audience, a key to its success. In the text, binary oppositions are subverted regularly this satisfies an active audience as they are taken by surprise in this. The pilot episode set up a few binary opposites, which then change as the direction of the series changes. ...read more.

Indeed Jack in arrive at the island escapes the loss caused by his fathers death. As he immediately has to spring into action as the island's only doctor. This is an introduction to the characters as he is the first character shown this is of importance. He is a major focus in terms of episodes and flashbacks. Originally, Jack was killed off in the first episode (Lost Series 1 Part, DVD extras) however; this was changed, as Jack is an important character for audiences, as they need a stereotypical hero character to support. Charlie the junkie rock star on Heroin represents drug abuse in a whole new light unprecedented in the American media. This shows changing US liberal attitudes to drugs particularly when examined alongside another series "Weeds" featuring drug addiction. As Charlie is lost in his drug habit and his drug, habit is the reason is lost on the island. Even the character of Charlie challenges the views of the apparent liberal network that created it according to the actor who plays him "I knew ABC wasn't happy with me playing a drug addict for an entire season"-(Dominic Monaghan p50.) This represents a nation/institution that is lost in terms of its values/morals. "The US is currently churning out a group of politically challenging films showing the current trend in the US media of liberalism"-Jonathan Ross. This statement shows current audience needs for thought provoking media, which is a desire Lost caters for. Charlie's state of loss is signalled through music as it suit's the nature of each character. His desperation is best shown in Pilot Part 1 where the excessive lengths to rescue his fix are illustrated by the continual close ups of the heroin bag which holds so much power over him carrying high impact for the audience. He finds himself on the island only showing his true nature to islanders when going cold turkey. "Charlie a failure with women, seeks redemption in love for the pregnant vulnerable Claire" (Cotta Vaz 2004) ...read more.

Due to the fact it is in the UK, Lost featuring suicide bombing may be sensitive post 7/7(See Bibliography Ref 2). This is present as when Channel Four began its remit was to "Encourage innovation, experiment, and be distinctive"-(P22, advanced studies in Media, Joe Nicholas, John Price, Nelson, and (UK) 1998. Lost certainly, meets these aspects of channels remit it "innovative" in the way it has never been seen before and it is "distinctive" from its contempary texts an effective attraction for audiences. Contermparies such as flagship shows like 24, Desperate Housewives, Sopranos. Have all clearly defined locations you know exactly where they are whereas Lost is so different because the series is an enigma, as the viewer doesn't know where they are or where the series is going. This helps to offer a wide variety of meanings that satisfies audience needs. In this need to be, innovative Channel Four "the channel set out to provide an alternative to the existing channels" suit the innovative style of Lost, which is changing television narrative structure. This breaks down the boundaries of post-modern media conventions as Lost could confuse viewers and make them dismiss it as nonsense. This corresponds strongly with Barthes' enigma codes theory, which confuses the viewer and through this generates more interest (See Bibliography ref 3). The audience gain a vast amount of pleasure in watching this text such as the countdown to the one big resolution in the end. In conclusion, Lost does offer a variety of levels to satisfy the audience whether it is through the supernatural, media politics, innovative narrative style etc. The meaning of Lost in Lost should be taken to mean that the series is densely packed with multiple meanings to satisfy an array of audience needs. It satisfies current desires of an active audience for intelligent texts, which have super hybrid aspects contained within them. Lost exists as a product of the "Flagship show" culture and a reaction to reality television. This is combined with a mixture of elements from a number of other texts illustrating inter-textual relationships. ...read more.