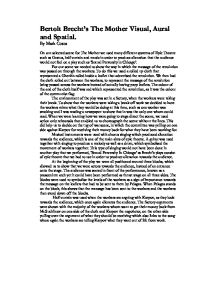 Bertolt Brecht's The Mother Visual, Aural and Spatial. By Mark Costa On our selected scene for The Mother we used many different systems of Epic Theatre such as Gestus, half-curtain and music in order to produce alienation that the audience would not feel on a play such as 's****l Perversity in Chicago'. For our scene we needed to show the way in which the message of the revolution was passed on through the workers. To do this we used a rolled up cloth that represented a Gherkin rolled inside a leaflet that advertised the revolution. We then had the cloth rolled out between the workers, to represent the message of the revolution being passed across the workers instead of actually having prop leaflets. ...read more.

When we were learning how we were going to stage direct the scene, we used action only rehearsals that enabled us to choreograph the scene without the lines. This did help us to decide on the tug of war scene, in which the committee was pulling on one side against Karpov for receiving their money back for what they have been working for. Musical instruments were used with chorus singing which produced alienation towards the audience, which is one of the main aims of epic theatre. A guitar was used together with singing to produce a melody as well as a drum, which symbolised the movement of workers together. This type of singing would not have been done in another play that we performed, 's****l Perversity In Chicago' as Brecht's plays consist of epic theatre that we had to use in order to produce alienation towards the audience. ...read more.

The blocks were used to symbolise the levels of the workers as a sign of importance towards the message on the leaflets that had to be sent to them by Pelagea. When Pelagea stands on the block, this shows that the message has been sent to the workers and the workers then stand down off the blocks. Half-curtain was used when the workers are arguing with Karpov, as they look towards the audience, which once again alienates the audience. The factory arguments were shown with the majority of the workers whom want to get their money back from Mr.Suchlinov on one side of the cloth and Karpov the negotiator, on the other side pulling over the argument of what they should be receiving which also links to the song where again the workers are telling Karpov what they want out of life from work. ...read more.