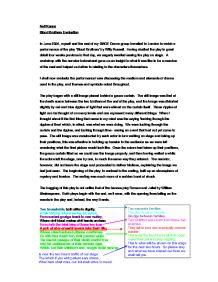 Nell Keene Blood Brothers Evaluation In June 2004, myself and the rest of my GSCE Drama group travelled to London to watch a performance of the play 'Blood Brothers' by w***y Russell. Having studied the play in great detail four weeks previous to that day, we eagerly awaited seeing the play on stage. A workshop with the narrator beforehand gave us an insight to what it was like to be a member of the cast and helped us further in relating to the characters themselves. I shall now evaluate the performance I saw discussing the medium and elements of drama used in the play, and themes and symbols noted throughout. The play began with a still image placed behind a gauze curtain. The still image was that of the death scene between the two brothers at the end of the play, and the image was distorted slightly by red and blue ripples of light that were shined on the curtain itself. These ripples of light can be thought of on many levels and can represent many different things. When I thought about it the first thing that came to my mind was the saying 'looking through the ripples of time' which, in effect, was what we were doing. We were looking through the curtain and the ripples, and looking through time - seeing an event that had not yet come to pass. The still image was constructed by each actor in turn walking on stage and taking up their positions, this was effective in building up tension in the audience as we were left wondering what the final picture would look like. ...read more.

This scene was extremely well portrayed, as it really made the audience feel what the characters were feeling and the fact that the audience just did not expect what was to come made it even more effective still. In the play the narrator played a very important part. It was he who took on the role of fate and destiny. Throughout the play it seemed, on occasion, that it was he who was controlling the events that were taking place. For example in the scene where the mothers made their pact the production showed it was the narrator who introduced the idea of the bible. It was he who passed it to Mrs. Lyons, had he not done this then she may never of thought of the idea. This is not unlike that of a Greek chorus. In the olden times a chorus was used to narrate plays and the leader of this would often interact with the characters on stage. The mere presence of the narrator was incredibly foreboding as his body language and facial expressions were very sinister throughout the play. The fact that the narrator never left the stage also added to the feeling that he was controlling the story and watching over everything that happened. Symbolism played a huge part in the play, so much so that it would take days to interpret it all. Props were used well as symbols throughout the play. A significant prop that was used in the play was the locket Mrs Johnstone gave to Eddie to remember her and Mickey as she thought they were never going to meet again. ...read more.

This difference in the way the two houses looked showed how the two families were of very separate classes. The Lyons were able to afford a large house, nice sofa and wallpaper still attached to the wall, however the Johnstones could not afford any of these things. Unemployment was a big problem in these times and this issue arose in the play, at one point we saw Mickey waiting to collect the dole with his brother. This was shown in the performance by lots of 'For sale' signs descending to position themselves outside the houses, including that of the Johnstone's. We also saw a change in the attitude of the characters there was a feeling of depression coming from the stage as the characters came to terms with their situations. The way unemployment was portrayed in the play was very effective it made the audience feel sorry for the characters, for Mickey's poor upbringing and also for Eddie, as his sheltered lifestyle left him very naive and vulnerable when eventually he was thrown into the 'real world'. In conclusion I feel that the play was incredibly successful in stuffing itself full of as many hidden meanings, symbols, themes and feelings as it possibly could. The way that the play took on another dimension, as it were, involving the audience to such a great level was incredible, heightening emotions and making itself memorable to say the least. Overall a very successful play that used the medium and elements of drama to its advantage in the greatest way possible. ...read more.