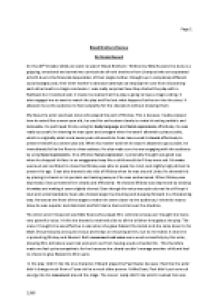 ﻿Page 1 Blood Brothers Review By Nicole Russell On the 20th October 2010, we went to watch ?Blood Brothers?. Written by w***y Russell, the story is a gripping, emotional and sometimes comical tale of twin brothers from Liverpool who are separated at birth due to the financial desperation of their single mother. Brought up in completely different social backgrounds, their birth mother?s obsessive attempts at keeping her sons from discovering each other lead to a tragic conclusion. I was really surprised how they started the play with a flashback but it worked well, it made me realise that the play is going to have a tragic ending. It also engaged me to want to watch the play and find out what happens further on into the story. It allowed me as the audience to feel sympathy for the characters without knowing them. My favourite actor was Sean Jones who played the part of Mickey. This is because I really enjoyed how he acted like a seven year old, he used his enthusiasm clearly to make his acting realistic and believable. He portrayed this by using his body language and facial expressions effectively. He was really successful in showing he was upset and arrogant when he wasn?t allowed to play outside, which is originally what a real seven year old would do. Sean Jones used his levels effectively to present himself as a seven year old. When his mother told him he wasn?t allowed to go outside, he immediately fell to the floor to show sadness. ...read more.

In my opinion there was a lot of poor acting; Edward?s facial expression was completely blank and to me seemed to have no fright in it what so ever. Also the how the police run in through the audience wasn?t effective because it was quite distracting and confusing as I didn?t know where to look. The lighting was a vital part to the play, it helped to create atmosphere. I felt that the use of red presented an evil feel towards the play. Red originally represents anger, murder and hatred. This happened when Mickey thought Linda was having an affair with Edward, in rage Mickey grabbed a gun and ran off the stage in search of Edward. They also used lighting to illustrate places they were, like when they were at the cinema and the lights were dimmed but certain lights were flickering on their face which made it look like a real cinema. These also made the audience feel like their part of the story and as if there watching a real film. They also used lighting to portray their emotions, for example when they got rehoused out into the countryside, the lights turned bright and happy, as if it?s a new start to their life, a new beginning. The lighting became brighter to show their emotions turned happy. This made me feel happy for the Johnstones as they got to start a new life for themselves. In the scene were Mrs Johnstone and Mrs Lyons swear on the bible the lights went dim and a spotlight came down on them. ...read more.

Paul however wore smart, fitted clothing that looked expensive. This portrayed that Edward was clearly brought up in a well off house. The set in ?Blood Brothers? was really effective because they showed the fact there was two different houses involved in the play. The difference in the houses was that on the rougher side, the houses were dull and boring, parts of the walls were crumbling and they had broken windows. On the other side of the street was the more posh and more well of houses, the houses on the more well off side had fixed windows, unbroken walls unlike the rougher side of the street. This gives off a theme of class and how it affects people in different backgrounds. In the end I feel like it?s a good play with lots of humour and effective acting. It was completely different to what I expected but a lot better than I thought it would be. It consists of humour, romance and tragic deaths which would generally allow you to not take your eyes of the stage. It?s a humorous, comical play which will leave the audience mind blown. The actors that took part really did well and their characterisation was brilliant. They all spoke the same accent, even though they weren?t all from Liverpool, which I congratulate them on. The fact there were hardly any people on the stage, I enjoyed as it made the play simple and not complex. I definitely would really take the opportunity to see this play again and I would highly recommend it to a friend or relative. 1,965 ...read more.