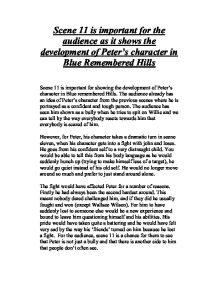 For him to have suddenly lost to someone else would be a new experience and bound to leave him questioning himself and his abilities. His pride would have taken quite a battering and he would have felt very sad by the way his 'friends' turned on him because he lost a fight. For the audience, scene 11 is a chance for them to see that Peter is not just a bully and that there is another side to him that people don't often see. T' was the night before Christmas and all through the Land, They're running like rabbits in Afghanistan, Osama's been praying, he's down on his Knees, He's hoping that Allah will hear all his Pleas. ...read more.

You think that those mountains are somewhere to Hide. They'll go down in history as the place where you Died. Remember Khadhafi and his Line of Death? He came very close, to his final Breath. So come out and prove it, that you are a Man, Cause our boys are coming and they have a Plan. They are our fathers and they are our Sons, And they sure do carry some mighty big Guns. They would have stayed home with children and Wives, Till you bastards came here and took all these Lives. Osama I wrote this especially for You, For air mail delivery by B-52. You soon will be hearing a thud and a whistle, Old Glory is coming, attached to a Missile I will not be sorry to see your a*s Go. It's Red, White, and Blue that is running this Show ...read more.