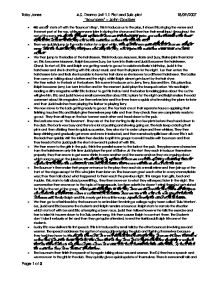 'Bouncers' - John Godber * 'Bouncers' starts off with the 'Bouncer's Rap', this introduces us to the play, it shows Eric singing the verses and the most part of the rap, while everyone joins in during the chorus and then has their small input throughout the rest of the song. I found the rap quite significant because it immediately gives us a sense that Eric is the most important character in the play and so the audience can see this from the start. * Then we quickly jump to the radio station for a short while, I thought this was quite important because straight away hints the multi-role play that goes on during the play, and it gives the audience a little taste of what to expect. * We then jump to the ladies at the hairdressers. This introduces Maureen, Rosie and Suzy, Elaine joins them later on. Eric becomes Maureen, Ralph becomes Suzy, Les turns into Rosie and Judd becomes the hairdresser, Cheryl. To start off, Eric and Ralph are getting ready to go out to celebrate Rosie's birthday, Judd is the hairdresser and she is chatting with Eric about music and then their plans for the night. Les then enters the hairdressers late and finds she is unable to have her hair done so she leaves to a different hairdresser. ...read more.

The DJ then has a speech and we move on to the girls in the club. They quickly give a quick update of themselves. There is some small talk and then we discover that Les has just seen her boyfriend kissing another girl. She gives a monologue on the situation; the other girls input ideas on what to do but Les remains upset. The section ends as they decide to dance. * We then go back to the bouncers, Ralph and Les play two Liverpudlians called Jock and Birdie, Eric and Judd remain as bouncers. Ralph and Les attempt to enter the club but the get refused because Eric and Judd claim that stag nights are prohibited. * Ralph and Les now become Brian and Mark, two yuppie types. They give themselves a quick introduction and then attempt to go inside but Judd and Eric refuse to let them in and Judd starts to take a threatening approach, Ralph and Les then decide to go to 'Tiffs' and hail a taxi. * We now see Ralph and Les switch to two punks called Ashley and Ruffage. Ralph and Les try to get into the club but Judd and Eric refuse to let them in because of the way they are dressed. Judd spits on Ralph and as the two are walking away they speak of writing a song about the incident called 'Fascist Pigs'. ...read more.

The four are obviously fairly drunk by now and this appears obvious in this scene. They chat about how cold and dark it is, Eric then urinates. There is then a big hype about how much money they have spent during the night and then they manage to hail a taxi. As the lads are in the car, one of them lights up a cigarette and then Ralph begins to feel sick. Eric decides he needs to go to the toilet again but the driver refuses to stop. Eric then 'goes' out the window and Ralph throws up on his back. Judd then closes the window on his Eric's p***s and then they arrive home. * They then move back to the Bouncers and we go back to the club, where they are clearing up. Eric finds out that two of the urinals are cracked, there are non-empty beer glasses everywhere and then Lucky Eric finds five pounds. Throughout this scene, Judd is eager to watch the p**n film. The scene ends with the three convincing Eric to watch the p**n with them. I found this to be significant because it tells us a little bit more about some of the characters' s****l nature. * The play then pleasantly ends the same way it begun, with the Bouncer's rap. This time everybody is singing in unison and then Les ends the play. ?? ?? ?? ?? Toby Jones A.S. Drama Unit 1.1 Plot and Sub-plot 18/09/2007 Page 1 of 3 ...read more.