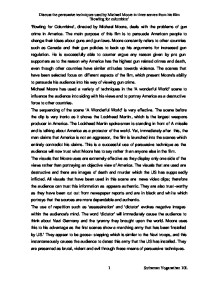 'Bowling for Columbine', directed by Michael Moore, deals with the problems of gun crime in America.

'Bowling for Columbine', directed by Michael Moore, deals with the problems of gun crime in America. The main purpose of this film is to persuade American people to change their ideas about guns and gun laws. Moore constantly refers to other countries such as Canada and their gun policies to back up his arguments for increased gun regulation. He is successfully able to counter argue any reason given by pro gun supporters as to the reason why America has the highest gun related crimes and death, even though other countries have similar attitudes towards violence. The scenes that have been selected focus on different aspects of the film, which present Moore's ability to persuade his audience into his way of viewing gun crime. Michael Moore has used a variety of techniques in the 'A wonderful World' scene to influence the audience into siding with his views and to portray America as a destructive force to other countries. The sequencing of the scene 'A Wonderful World' is very effective. The scene before the clip is very ironic as it shows the Lockheed Martin, which is the largest weapons producer in America. The Lockheed Martin spokesman is standing in front of A missile and is talking about America as a protector of the world. Yet, immediately after this, the man claims that America is not an aggressor, the film is launched into the scenes which entirely contradict his claims. This is a successful use of persuasive technique as the audience will now trust what Moore has to say rather than anyone else in the film. The visuals that Moore uses are extremely effective as they display only one side of the views rather than portraying an objective view of America. The visuals that are used are destructive and there are images of death and murder which the US has supposedly inflicted. All visuals that have been used in this scene are news video clips; therefore the audience can trust this information as appears authentic. ...read more.

They begin to feel depressed and feel sympathy for the children who died in the massacre at Columbine High School. Along with the mournful music, there are voices in the background. The voices are overlaid with each other to create confusion and hysteria. There are 911 calls in the background which had been recorded during the incident. From these calls that are made to the police, specific calls have been targeted and replayed in this footage. We hear calls from parents who are searching for their sons and daughters within the school. The tones of their voices accentuated and add to the chaos and confusion of the scene. There is one specific audio, where the father of one of the shooters is heard talking to the police. The father seems calm, almost as though he is uncertain of what his son is doing to others. As well as hearing 911 calls, the media is heard broadcasting the news as it occurs. This shows how insensitive Americans have become to gun crimes and how the news reporters are immediately looking for sources that will provide them the details they will need for their story. They are not interested on the well being of the students as much as the actual success of the story and portray American news reporters as being exploitive. After a long scene, where Moore's voice is unheard, and the story is told through the CCTV footage and the 911 calls his voice breaks the silence. The tone of his voice serious which is the first time in the film that he expresses this tone. The words he uses are very formal, and to the point and uses a variety of statistics to portray his message across. 'Over 900 rounds of ammo were fired' shows the seriousness and disaster that occurred at this school. Moore does not need to use any persuasive techniques to show the enormity of the situation. ...read more.

All these historical inaccuracies are effective as it promotes Moore's view on r****m within America which is tied in with gun crimes. By providing false information the audience is tricked into believing what Moore has to say, which is masked by comic cartoons so the audience do not have time to dwell on these facts to see if they are accurate or not. Irony is also used within this scene as the animation which is providing the audience with the history of America is a talking bullet. The final clip of the cartoon scene shows that the NRA and the KKK were allegedly founded at the same time; 'the same year that the Klan became an illegal terrorist organisation'. Moore is trying to portray a depiction of a r****t NRA beginning to emerge. By linking the NRA and the KKK together, Moore is able to display the NRA as evil and as a terrorist group in a way. This sequence is attempting to create the impression either that the NRA and the Klan were parallel groups or that when the Klan was outlawed its members formed the NRA. Both are completely wrong however this is effective as it illustrates that since the KKK was evil, that the NRA is also evil as it is made up of the same members or that both groups have the same belief. Moore is able to use a number of persuasive techniques in the three scenes from Bowling for Columbine to express his views on gun laws. The moods of these three scenes vary considerably, from humour, to serious to sarcasm and irony. By appealing to different types of emotions, the audience is able to connect with Moore effectively. As well as this, by feeling humorous or sad when Moore intends the audience to be, the viewers immediately, whether intentionally or unintentionally side with Moore's view. ?? ?? ?? ?? Discuss the persuasive techniques used by Michael Moore in three scenes from his film 'Bowling for columbine' 1 Sutharsan Yoganathan 10L ...read more.