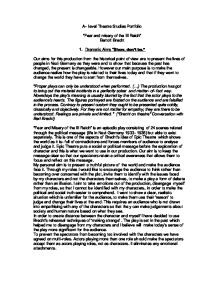 A- level Theatre Studies Portfolio "Fear and misery of the III Reich" Bertolt Brecht 1. Dramatic Aims "Show, don't be." Our aims for this production from the historical point of view are to present the lives of people in n**i Germany as they were and to show that because the past has changed, the present is changeable. However our main purpose is to make the audience realize how the play is related to their lives today and that if they want to change the world they have to start from themselves. "Proper plays can only be understood when performed. (...) The production has got to bring out the material incidents in a perfectly sober and matter- of- fact way. Nowadays the play's meaning is usually blurred by the fact that the actor plays to the audience's hearts. The figures portrayed are foisted on the audience and are falsified in the process. Contrary to present custom they ought to be presented quite coldly, classically and objectively. For they are not matter for empathy; they are there to be understood. Feelings are private and limited." ("Brecht on theatre" Conversation with Bert Brecht) "Fear and Misery of the III Reich" is an episodic play consisting of 24 scenes related through the political message (life in n**i Germany 1933- 1938) but able to exist separately. This is one of the aspects of Brecht's idea of Epic Theatre which shows the world as it is- full of contradictions and forces members of audience to analyse and judge it. Epic Theatre puts a social or political message before the exploration of character and this is what we want to use in our production. Our aim is to keep the message clear so that our spectators retain a critical awareness that allows them to focus and reflect on this message. My personal aim is to present a truthful picture of the world and make the audience face it. ...read more.

I have decided to research some of the Chinese gestus and use them in our performance. I found it difficult especially because most of the hands movements have got a few different meanings, but also because it is hard to relate most of them to our play. What I found really useful however is that this gests can easily show relations between two characters onstage as well as their status. For instance if we want to say that one actor is a child we will use the 'utsanga' move, if we want to show marriage we will use the 'katakavardhana' gestus. I found it the most helpful while rehearsing "The spy". The scene was quite long, so we have decided to cut it in order to make it tenser. However we still had problems with expressing our characters. We did not know how to show the clear situation without being to engaged with the characters. We used seven gestus to show characters' emotions and this worked well for us as actors and will not let the spectators forget that they are in the theatre. In the beginning of the scene we would like to show that Sam is a small boy, so he will use the 'utsanga' gestus which means 'a child'. Another one was to show that Ollie and I are married, we used the 'katakavardhana' gestus. The next one was used to show differences between us and it was the 'katarimukha'. While quarrelling we used the "mrigashirsha" gestus. Then to show Ollie's character's aggressive mood he used the 'shukatunda' and for my character I have chosen the 'alapadma' gestus which means sadness because of being apart, since the woman is worried about her husband and misses being close to him, but he keeps pushing her away. At the end to show the growing fear we used the 'sandamsha' gestus. 3. Inspiration and Influences "Silent film" One of our main influences was Charlie Chaplin and silent film. ...read more.

In case of the fire we minimise the audience number (to prevent overcrowding) and made sure that fire exits were clearly marked and easily accessed. When using gasmasks we were aware some people can find it difficult. We spent some time practising to make sure we know exactly how to do it. We never rushed with gasmasks. While using the whip I always made sure my fencing jacket was properly tied. We took special care during whipping scene, we rehearsed it a lot and always with a teacher in the same room with us. We didn't forget about warming-up before each rehearsal to keep ourselves away from any injury. 7. Evaluation The final production proved that we achieved most of our aims. We all were well alienated which I believe highlighted the context of the play. We made that clear that we were retelling events which were not actually happening onstage and therefore we unable the spectators to judge a situation objectively. After the series of rehearsals with Chinese Theatre Gests, we were able to unintentionally incorporate Brechtian Gestus into the play. The montage in the beginning of each scene was I believe significant in better understanding of our aim, the audience were reminded that they are in a theatre watching a play for a reason- to learn and judge. It was a good idea to start slowly and increase the tension throughout the play. It prepared all of us but especially spectators, for the hard and touching end of our production. We left the audience thoughtful and concerned about the topics we have shown. In 'what to improve' part, whipping scenes should be mentioned. In 'Servants of the People, as well as in 'Two Bakers' actors' reactions could have been improved. A good way is to try to overreact hard scenes during rehearsal period, and then it becomes easier to show onstage. Overall, I think that our production was a success and most of epic theatre aims were achieved. ...read more.