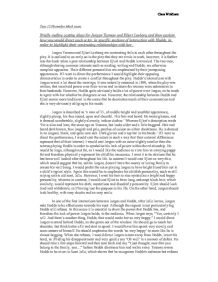 Briefly outline casting ideas for Jorgen Tesman and Ejlert Lovborg and then explain how you would direct each actor, in specific sections of interaction with Hedda, in order to highlight their contrasting relationships with her.

Year 13 November Mock exam Briefly outline casting ideas for Jorgen Tesman and Ejlert Lovborg and then explain how you would direct each actor, in specific sections of interaction with Hedda, in order to highlight their contrasting relationships with her. Jorgen Tesman and Ejlert Lovborg are contrasting foils to each other throughout the play. It is outlined to us early on in the play that they are rivals in work, however, it is further into the book when a past relationship between Ejlert and Hedda is revealed. The two men, although sharing common interests such as reading, writing and Hedda, are otherwise complete opposites. Their different personalities are emphasised by their juxtaposing appearances. If I were to direct the performance I would highlight their opposing characteristics in order to create a conflict throughout the play. Hedda's interactions with Jorgen reveal a lot about the marriage. It was naturally assumed in 1890, when the play was written, that men held power over their wives and in return the women were submissive to their husbands. However, Hedda quite obviously holds a lot of power over Jorgen, as he tends to agree with her whether he disagrees or not. ...read more.

Ejlert should look tired and withdrawn, as if having lost the purpose to his life. On the other hand, Jorgen should look healthy, with rosy cheeks and an easy smile. In one of the first interactions between Jorgen and Hedda, after Julle leaves, Jorgen asks Hedda to be affectionate towards his aunt. Although the request is not particularly big, Hedda still refuses. In this scene it is essential to show the power that Hedda has, and therefore the lack of power Jorgen holds, to the audience. When Jorgen says, "Yes, certainly I will. And there's another thing, Hedda, that would make her so very happy," I would direct Jorgen to stand behind Hedda, as she gazes out of the window. He should go to touch her shoulder, but think better of it and start to speak. I would have him speak very slowly, and seem unsure of himself. He should emphasise the words 'so very happy' to seem like he is almost begging. When she refuses, I would direct Jorgen to turn away from Hedda, lower his head, as if hiding his disappointment and very quietly say 'Oh well' in a manner of defeat. ...read more.

he should ask her without pause or embarrassment. Although when the play was written, such subjects and questions would not have been deemed appropriate between a single man and a married woman. However, I want to show Hedda and Ejlert's relationship as very informal and relaxed. It is clear that Hedda still holds Ejlert in high regard, however, she still likes to try and control him. I would like the audience to understand the feelings that Hedda and Ejlert still hold for each other but to also feel anger towards Hedda for treating both Jorgen and Ejlert unfairly. They will probably feel wary of Ejlert at first but I would like the audience to warm to him through his relaxed manner. Through contrasting the characters of Jorgen and Ejlert, I wish to create a dark and light style opposition between the two. Although neither is good nor evil, I want the audience to see the huge contrast and hence understand the conflict between them. The audience should want both Jorgen and Ejlert to 'win' whilst at the same time, they dislike their worse points. This should further intensify the relationships Hedda has with the men and therefore creates more tension for the audience within the unravelling story. ?? ?? ?? ?? Clara Widdison ...read more.