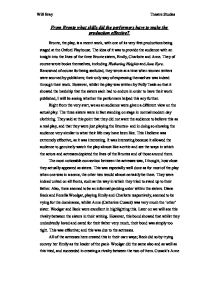 Bronte, the play, is a recent work, with one of its very first productions being staged at the Oxford Playhouse. The idea of it was to provide the audience with an insight into the lives of the three Bronte sisters

From Bronte what skills did the performers have to make the production effective? Bronte, the play, is a recent work, with one of its very first productions being staged at the Oxford Playhouse. The idea of it was to provide the audience with an insight into the lives of the three Bronte sisters, Emily, Charlotte and Anne. They of course wrote books themselves, including Wuthering Heights and Jane Eyre. Renowned of course for being secluded, they wrote at a time when women writers were scorned by publishers; their only way of expressing themselves was indeed through their work. However, whilst the play was written by Polly Teale so that it showed the hardship that the sisters each had to endure in order to have their work published, I will be seeing whether the performers helped this any further. Right from the very start, we as an audience were given a different view on the actual play. The three sisters were in fact standing on stage in normal modern day clothinhg. ...read more.

Cusack's Anne However this bond was not shared with their brother Bramwell. Both he and his sisters felt that the other side had wasted their lives. Bramwell felt that his sisters had no life, confined to the house, and the sisters felt on the other hand that Bramwell was shallow, as his life consisted of little more than drink. This tension reared its head finally in one scene in particular. This was where he pinned Emily down on the floor and taunted her of the fact that she was still a virgin. This was extremely well done as at a couple of points during the scene, the audience were unsure as to whether Bramwell was actually about to r**e his own sister. The other sisters were of course torn between stepping and protecting Emily, as possibly getting roughed up themselves, or simply standing by and watching Bramwell. We can see this emotion on the stage as the sisters deliberate what to do; such was the quality of the acting that was portrayed by their bond. ...read more.

At this part, she throws feathers everywhere across. Throughout the play at certain she had thrown small handfuls on stage. However, it seemed as thought at the end she was letting all of her emotion and stress out on stage, as though she had finally exploded with anger. It appeared as though she had literally gone mad also. The actress here was extremely effective, not only because her actual action was so random, but also because the way which she so carelessly threw away the feathers was good as it showed that she also seemed to know not what she was doing, just like Charlotte or Emily letting the ink ooze from their pen onto the page. Thus in conclusion it could be said that whilst the play of Bronte itself was indeed extremely thought-provoking and even gain an entertaining into the lives of the Bronte sisters, it was undoubtedly the performers who made this possible, through their own separate ways. The skills required needed to be of the highest quality. The performers had this; and thus made the production effective. ?? ?? ?? ?? Will Bray Theatre Studies ...read more.