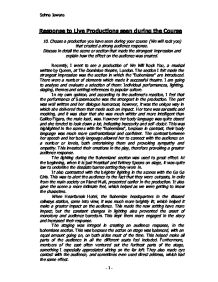 Choose a production you have seen during your course (We will rock you) that created a strong audience response.Discuss in detail the scene or section that made the strongest impression and explain how the effect on the audience was created.

Response to Live Productions seen during the Course 10. Choose a production you have seen during your course (We will rock you) that created a strong audience response. Discuss in detail the scene or section that made the strongest impression and explain how the effect on the audience was created. Recently, I went to see a production of We Will Rock You, a musical written by Queen, at The Dominion theatre, London. The section I felt made the strongest impression was the section in which the "Bohemians" are introduced. There were a number of elements which made it successful theatre. I am going to analyse and evaluate a selection of them: Individual performances, lighting, staging, themes and setting/references to popular culture. In my own opinion, and according to the audience's reaction, I feel that the performance of Scaramouche was the strongest in the production. The part was well written and her dialogue humorous; however, it was the unique way in which she delivered them that made such an impact. ...read more.

This kept them more engaged in the story and increased their response. The staging was integral in creating an audience response, in the bohemians section. This was because the action on stage was balanced, with an equal amount going on, on both sides most of the time. This helped make all parts of the audience in all the different seats feel included. Furthermore, members of the cast often ventured out the furthest parts of the stage, something I especially appreciated sitting on the far left. They also made eye contact with the audience, and sometimes even used direct address, which had the same effect. The position of the Bohemians on stage was structured in such a way that it did not appear so. You could still see all of them but their arrangement did not seem as ordered and controlled as the Ga Ga Girls and the Globalsoft people, who were all in straight lines. They were also on different levels, this all worked to create an informal and more inviting atmosphere, and draw the audience into the story, and sympathise with their plight. ...read more.

Because of her already established connection with the audience, this created a happy response. The production was set on another planet called Planet Mall. I think this was primarily because large elements of the play are fantastical, so it helped you suspend your disbelief and become more absorbed in it. It was also a play on words because 'malls' are archetypical of the institutions the play is criticising. However, especially during the Heartbreak Hotel section, there are many references to pop culture and things familiar to today's audiences. This increased audience response because when they can identify them, they can relate to them. It was also used as a comic tool. For example, the 'macho' action man character was called Britney Spears, which was extremely ironic. The production played on the pretence that the Bohemians knew very little about today, so they were oblivious as to how wrong they had been in their name choices. Most of today's audience would understand the joke, and therefore feel more involved in the production because they feel it is more aimed at them. ...read more.