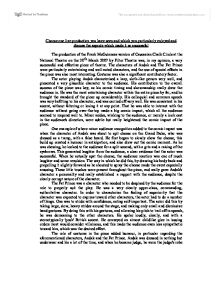 Choose one live production you have seen and which you particularly enjoyed and discuss the aspects which made it so successful The production of the Frank McGuinness version of Caucasian Chalk Circle at the National Theatre on the 20th March 2007 by Filter Theatre was, in my opinion, a very successful and effective piece of theatre. The characters of Azdak and The Fat Prince were particularly entertaining and well-acted characters, and the use of special effects in the piece was also most interesting. Costume was also a significant contributory factor. The actor playing Azdak characterised a lazy, sloth-like person very well, and presented a very plausible character to the audience. His contribution to the overall success of the piece was key, as his comic timing and showmanship really drew the audience in. He was the most entertaining character within the entire piece by far, and he brought the standard of the piece up considerably. His colloquial and common speech was very befitting to his character, and was carried off very well. He was consistent in his accent, without faltering or losing it at any point. ...read more.

These little touches were present throughout the piece, and really gave Azdak's character a personality and really established a rapport with the audience, despite the clearly corrupt nature of the character. The Fat Prince was a character who needed to be despised by the audience for the role to properly suit the play. He was a very clearly upper-class, commanding, authoritative character. In order to characterise the feeling of superiority that the character was expected to express toward other characters, the actor had to do a number of things. One was to stride with confidence, acting self-important. The actor did this by taking large, slow, heavy strides around the stage, and making only small and dismissive hand gestures. By doing this with his gestures, and allowing his pitch to trail off in speech, he was demeaning to the other characters. He spoke loudly, clearly, and with a stereotypically 'posh' British accent. He conveyed an almost childlike glee in issuing orders most would consider villainous, and this made the audience even less sympathetic toward him, which was the desired effect. The role of costume in the piece added humour, in particular regarding the aforementioned characters, Azdak and the Fat Prince. ...read more.

A good example of where special effects really added to the performance was where Grusha had to give the peasant, Jussup, a bath. The actor of Jussup was in a bath onstage, however there was no water in the bath. Instead, each time Jussup moved, the actor who played the Fat Prince, who was crouched downstage-right, would pour water form a jug into a bucket. This was all onstage, and done up to a microphone so that the audience could hear it. This was of course an example of Brechtian Theatre, so was true to form. This was an interesting and skilfully implemented effect, which enhanced the production both in keeping to form and also adding interest for the audience. The sound of the water was also dramatic, and highlighted the tense atmosphere between Grusha and Jussup. Overall, therefore, the production was a great success, the most notable contributors being the actors of Azdak and the Fat Prince, the role of costume, and the very Brechtian special effects implemented. The examples outlined above are the moments which really displayed these strengths well, but are by no means the only effective moments in the play. The play as a whole was entertaining, intriguing and effective, keeping true to Brechtian form. ...read more.