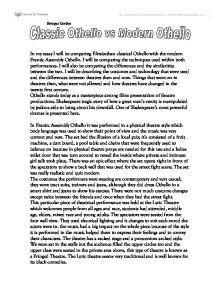 In my essay I will be comparing Elizabethan classical Othello with the modern Frantic Assembly Othello. I will be comparing the techniques used within both performances. I will also be comparing the differences and the similarities between the two. I will be describing the costumes and technology that were used and the differences between theatres then and now. Things that went on in theatres then, what were not allowed and how theatres have changed in the twenty first century. Othello stands today as a masterpiece among films presentation of theatre productions. Shakespeare tragic story of how a great man's vanity is manipulated by jealous aide to bring about his downfall. One of Shakespeare's most powerful dramas is presented here. In Frantic Assembly Othello it was performed in a physical theatre style which body language was used to show their point of view and the music was very current and new. The set had the illusion of a local pub; it's consisted of a fruit machine, a dart board, a pool table and chairs that were frequently used to balance on because in physical theatre props ...read more.

the music had a big impact on the whole piece because of the style it is performed in the music helped them to express their feelings and to convey their characters. The theatre has a racked stage and a proscenium arched style. We were sat in the stalls but the audience filled the upper circles too and the upper class were seated in the private area above, this type of theatre is known as a Fringed Theatre. The Lyric theatre seems very traditional and is well known for its black comedies. Classical Othello was made in the Elizabethan period and the style of drama that was used was melodrama comparing to Frantic Assembly their performance were more subtle. The piece was performed in an ancient style because their gestures were very over the top and the languages that were used were Shakespearian text. Unlike modern Othello, they spoke with a bit of modern day slang and northern accents which is more relatable to people of the twenty first century. ...read more.

There is one thing that still remains the same and it is very symbolic in Othello and that he was played by a black man in both versions. Theatre has changed a lot since the Elizabethan period; people were allowed to do certain things while other things were forbidden; People were allowed to shout, throw things on stage, they had freedom of speech. Although no females were allow and they had to wear masks to disguise their selves, ethnic origins were forbidden; only aristocrats were welcome. There were no controversial issues being brought up in theatre (no politics) and no under age were allowed (students, family etc.). But theatre has had a big turn around since then; people from all ages, ethnic background were welcome, people applauded during and after a performing. Actors were treated very differently by members of the public when performance; people took photographs, they talked, some fell asleep and the more reserved people took an interest. In modern times like these theatres are allowed to bring up any political issues they feel to and theatre is now capable of leaving any sort of effect or impact on an audience when they leave. ?? ?? ?? ?? Sanique Gordon ...read more.