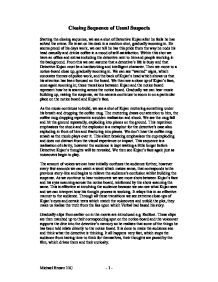 Closing Sequence of Usual Suspects Starting the closing sequence, we see a shot of Detective Kujan after he feels he has solved the crime

Closing Sequence of Usual Suspects Starting the closing sequence, we see a shot of Detective Kujan after he feels he has solved the crime. He is sat on his desk in a medium shot, gradually zooming in. He seems proud of his days work, we can tell he has this pride from the way he nods his head casually and drinks coffee in a mood of self-satisfaction. Within this shot we have an office and extras including the detective next to him and people working in the background. From this we can assume that a detective's life is busy and that Detective Kujan must be a hardworking and intelligent character. Then we move to a notice-board close up, gradually zooming in. We can see "wanted" signs, which conotates themes of police work, and the back of Kujan's head which shows us that his attention has been focused on the board. We then see a close up of Kujan's face, once again zooming in; these transitions between Kujan and the notice board represent how he is scanning across the notice board. Gradually we can hear music building up, raising the suspense, as the camera continues to zoom in on a particular place on the notice board and Kujan's face. ...read more.

We see a new secret side to him, we realise he is intelligent and that he kept the detective and the audience mesmerized with his lies and stories, the whole time. One very good shot in this part is of the car driving past we, can see its mirror as it drives beside Verbal, a strong image of reflection. To conclude the sequence we see a picture of "Keiser Sos�" that was faxed through. This is at the peak of suspension and finishes off any doubts or confusions the audience may have had till now. The transition of Verbal as he walks away, from cripple to master villain is a stroke of cinematic brilliance, it is the moment that everyone (audience included) is punished for having thought that as a cripple, Verbal was always a victim, and the film has played magnificently on the viewers and the detectives prejudices to prove how wrong they are. When we see him driven off the shot is contrasted by the detective looking vainly for him, is a commencement of fading out, with fading music to have the same effect. During the silence just for a moment of impact we see a clip from the middle of the film "and like that" *puff* "he's gone" said by verbal earlier to throw everyone of from thinking it was him but now to emphasise that it is him. ...read more.

They enforced contracts on their stars and held them to them. They dictated their stars lives', how they dressed, where they would go and created the publics view by building an image of the star that was not always true. Cinema was the main form of international communication and their influence was incredible. As other forms of communication have progressed the Hollywood studios lost their power base. The most notable of these was television. With the ever spiraling costs of creating a new film it is important that the large studios diversify and Fox have done this successfully with their TV stations. Fox have managed to compete in an environment which is extremely harsh, where vast sums of money are gambled on what will be in vogue with the public. Many studios have lost in this gamble. Studios no longer drive the public, the public now drive the film industry and the film industry has had to adapt to this. The production of videos and dvds now brings the cinema into peoples homes and they are less inclined to go to the cinema itself. The modern Hollywood studio must try and protect it's investment costs from copyright infringements, the internet and forgeries. ?? ?? ?? ?? Michael Brown 11C - 1 - ...read more.