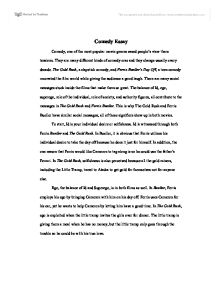 Comedy Essay Comedy, one of the most popular movie genres eased people's view there tensions. They are many different kinds of comedy eras and they change usually every decade. The Gold Rush, a slapstick comedy, and Ferris Bueller's Day Off, a teen comedy renovated the film world while giving the audience a good laugh. There are many social messages stuck inside the films that make them so great. The balance of Id, ego, superego, role of the individual, role of society, and authority figures, all contribute to the messages in The Gold Rush and Ferris Bueller. This is why The Gold Rush and Ferris Bueller have similar social messages; all of these signifiers show up in both movies. To start, Id is your individual desire or selfishness. Id is witnessed through both Ferris Bueller and The Gold Rush. ...read more.

In The Gold Rush, ego is exploited when the little tramp invites the girls over for dinner. The little tramp is giving them a meal when he has no money, but the little tramp only goes through the trouble so he could be with his true love. During Ferris Bueller and The Gold Rush, superego, or the concern for society, is seen. For example in Bueller, Jeannie, Ferris' sister, ends up still helping Ferris from getting in trouble after she knows that Ferris took the day off. In addition, Cameron exploits his superego when he allows Ferris to take his father's prized possession, the Ferrari. In The Gold Rush, superego is glimpsed when the mystery man helps the tramp, when he faints, and gives him a place to live and eat. Fourth, individualities are noticed in both motion pictures. ...read more.

Finally, authority figures, a major theme, are demonstrated similarly in the two movies. For instance, in Bueller, authority figures are portrayed as air heads or incredibly stupid. In addition, they always are the ones that lose and the kids are never caught. In the Gold Rush they are perceived the same way, authority is portrayed as bad since they are never there at the right time. Such as at the end, when they assume the little tramp does not have a ticket even though he is a now rich and famous man These six social messages, as explained above are viewed in the two films. They propose the same significances and bring forth similar feelings. These movies help poke fun at these social implications that run a human beings everyday life. In the end, Ferris Bueller's Day Off and The Gold Rush were two incredibly funny films and should be seen by every high school student. ...read more.