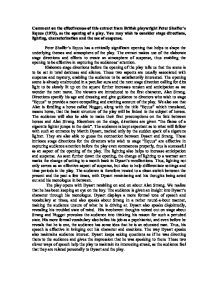 Comment on the effectiveness of this extract from British playwright Peter Shaffer's Equus (1973), as the opening of a play. You may wish to consider stage directions, lighting, characterization and the use of suspense.

Comment on the effectiveness of this extract from British playwright Peter Shaffer's Equus (1973), as the opening of a play. You may wish to consider stage directions, lighting, characterization and the use of suspense. Peter Shaffer's Equus has a critically significant opening that helps to shape the underlying themes and atmosphere of the play. The extract makes use of the elaborate stage directions and effects to create an atmosphere of suspense, thus enabling the opening to be effective in capturing the audiences' attention. Elaborate stage directions before the opening of the play tells us that the scene is to be set in total darkness and silence. These two aspects are usually associated with suspense and mystery, enabling the audience to be satisfactorily interested. The opening scene is already enshrouded in a peculiar aura and the next stage direction calling for dim light to be slowly lit up on the square further increases tension and anticipation as we wonder the next move. The viewers are introduced to the first character, Alan Strang. Directions specify his age and dressing and give guidance to directors who wish to stage "Equus" to provide a more compelling and exciting account of the play. ...read more.

Thus, lighting not only serves as an effective aspect of suspense, but also to help differentiate settings and time periods in the play. The audience is therefore treated to a clean switch between the present and the past a few times, with Dysart reminiscing and his thoughts being acted out and his monologue in between. The play opens with Dysart rambling on and on about Alan Strang. We realize that he has been keeping an eye on the boy. The audience is given an insight into Dysart's character through his monologue. Dysart displays a more formal tone of speech and vocabulary at times, and also speaks about Strang in a rather round-a-bout manner, making the audience unsure of what he is driving at. Dysart also speaks disjointedly, revealing his troubled state of mind. His incoherent thoughts voiced out on stage about Strang and Nugget provokes the audience into thinking his reason for such a pertubed state. His more formal vocabulary also belies his job as a psychiatrist, and even before he reveals that he is one, the audience has some idea that he is an educated man. ...read more.

It is also revealed that Dysart has been called to help Strang rid himself of the fetish. Through Dysart's recollection of the fateful meeting with Hesther that he blames for changing his life we realize that Strang has probably been arrested for doing something shocking and was almost sentenced to life imprisonment if Hesther had not intervened. This subtle revelation keeps the audience rooted to their seats as they try to figure out what heinous crime has Strang committed, possibly to horses since it is evident that Strang has a great interest, however deformed, for them. All these events help to shape the overall suspenseful mood of the play. The extract is indeed effective as an opening for the play as it reveals snippets of the characters and the plot tension that is underlying. The audience is able to make the connection between horses and Strang's psychological conflict with them. The stage directions and lighting also serve to aid the directors in maintaining audience interest, essential for the opening to be successful. The characterization and revelation of themes in the plot therefore make the extract an effective opening for the play. Clara Woon 1T12 ...read more.