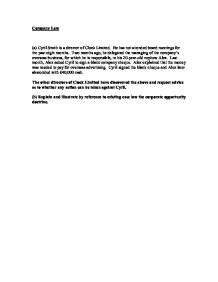 Company Law (a) Cyril Smith is a director of Clock Limited. He has not attended board meetings for the past eight months. Two months ago, he delegated the managing of the company's overseas business, for which he is responsible, to his 20-year-old nephew Alex. Last month, Alex asked Cyril to sign a blank company cheque. Alex explained that the money was needed to pay for overseas advertising. Cyril signed the blank cheque and Alex later absconded with �40,000 cash. The other directors of Clock Limited have discovered the above and request advice as to whether any action can be taken against Cyril. (b) Explain and illustrate by reference to existing case law the corporate opportunity doctrine. (a) The issue here is whether Cyril has breached the duties he owes the company as a director, specifically the common law duty of skill and care. The case law on this issue seemed to suggest that a fairly minimal standard was acceptable. For example, in Re City Equitable Fire Insurance Co Ltd [1925] Ch 407, the duty was stated as being that: A director need not exhibit greater skill ...read more.

The court also accepted that the level of care to be exhibited did require some objective element, being that which an ordinary man might be expected to take on his own behalf. More recent case law has modified the standard expected, comparing it to that set out in section 214 Insolvency Act 1986. The provisions in section 214 cover liability for wrongful trading and consider the general knowledge, skill and experience that may reasonably be expected of a person carrying out the same functions as are carried out by that director and the general knowledge, skill and experience that the director has. The test is therefore both objective and subjective. It has been applied when considering duties of care and skill in the cases of Norman v Theodore Goddard [1991] BCLC 1028 and Re D'Jan of London Ltd [1993] BCC 646. In view of the changing standards in this area and the court's decision in Dorchester Finance Co Ltd v Stebbing [1989] BCLC 498, the likelihood is that, were action taken against him, Cyril would be found to have breached his duties of care and skill by signing a blank cheque, delegating his duties to his nephew and failing to attend to the business of the company. ...read more.

The gas company would not deal with Industrial Developments Consultants Ltd, but would deal, in a private capacity, with the managing director, who therefore resigned, and took on the contract. The court decided he was liable to the company for the entire benefit of the contract. However, if a company legitimately decides against pursuing a particular business opportunity, then a director may take that opportunity for himself or a company controlled by him as in Peso Silver Mines v Cropper (1966) 58 DLR (2d) 1. The strict application of the corporate opportunity doctrine may be being replaced by a more flexible approach. For instance, in Island Export Finance Ltd v Umunna [1986] BCLC 460, the court indicated a willingness to take account of the circumstances surrounding the case. In this example, referring to Canadian Aero Services Ltd v O'Malley (1973) 40 DLR (3d_ 371, the court considered amongst other things the nature of he corporate opportunity, its ripeness and the director's relation to it. Whether this approach will be followed by English courts is yet to be seen and may not be the case following Guinness plc v Saunders [1990] 2 AC 663, where the House of Lords favoured a strict application of fiduciary duties. ...read more.