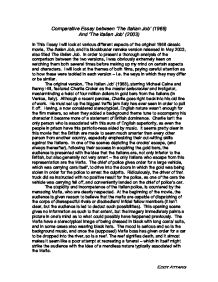 Comparative Essay between 'The Italian Job' (1968) And 'The Italian Job' (2003) In This Essay I will look at various different aspects of the original 1968 classic movie, The Italian Job, and its blockbuster remake version released in May 2003, also titled The Italian Job. In order to present a thorough analysis of the comparison between the two versions, I was obviously extremely keen on watching them both several times before making up my mind on certain aspects and characters. I will look at the themes of both films, paying careful attention as to how these were tackled in each version - i.e. the ways in which they may differ or be similar. The original version, 'The Italian Job' (1968), starring Michael Caine and Benny Hill, featured Charlie Croker as the master safecracker and instigator, masterminding a heist of four million dollars in gold bars from the Italians (in Venice, Italy). Although a recent parolee, Charlie goes right back into his old line of work. He must set up the biggest traffic jam Italy has ever seen in order to pull it off. Having, a now considered stereotypical, English nature wasn't enough for the film makers, so when they added a background theme tune to accompany his character it became more of a statement of British dominance. ...read more.

Although the audience isn't given visual proof of the events after he is dragged into the room with them, certain comments and expressions that follow make it clear that their purpose was for a night of intimacy. It is so clear therefore how much times have progressed since the making of the 1968 version, and the 2003 'The Italian Job'. One of the leading roles in the 2003 movie is the character of Stella Bridger, played by the incredibly attractive Charlize Theron (proof that women still represent sexuality). Her role in the film, expectedly as the daughter of the highly recognised master safecracker John Bridger, is to break into the safe holding the gold. Such central role to the storyline was never given to any female character in the older version, which shows a drastic increment in the respect and admiration of females in predominantly 'male' roles. An actual example of women taking on characters generally associated with males, is when Stella is racing against time on the streets of Los Angeles in her MINI Cooper and does an incredible hand-brake manoeuvre to park between two cars which left very little space. When she enters a building (presumably where her office is), she asks a secretary how long she took, and after she's replied she adds "You're the man!" ...read more.

the audience may subconsciously place the blame for this accident on him - despite the fact that the other accomplices where creating a lot of distraction by celebrating their success. In the modern version of the film, there is also only one black person with a central role, except this time he has a more vital presence and more dialogue. Left Ear (played by Mos Def) takes on the part of the explosives expert - which therefore immediately gives him more of an intelligent part than the other black character. Regardless of this improvement in the ideologies surrounding black people, during the scene in which the team are discussing their plans for their rich futures (believing that everything had undoubtedly gone as planned), Handsome Rob and even Lyle have 'cool' plans for how to spend their money (involving women and s*x), but Left Ear's only dream is to do something 'sensible' and buy a house in Spain with a room for just his shoes. This may not necessarily be a negative representation, but certain audiences may believe it to be unrealistic. The ending to the 1968 'The Italian Job' is unconventional and leaves the audience with a cliff-hanger which has had critics commenting on since release. There are no hints as to whether they will get out of the mess richer, or all dye trying. Whereas the modern version has been criticized for their conventional happy ending, in which everything turns out predictably well for the 'good guys' (which are actually thieves). Eddy Attang ...read more.