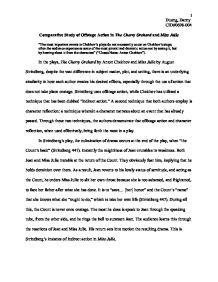 Comparative Study of Offstage Action in The Cherry Orchard and Miss Julie "The most important events in Chekhov's plays do not necessarily occur on Chekhov's stage; often the audience experiences some of the most pivotal and dramatic action not by seeing it, but by hearing about it from the characters" ("ClassicNotes: Anton Chekhov"). In the plays, The Cherry Orchard by Anton Chekhov and Miss Julie by August Strindberg, despite the vast difference in subject matter, plot, and setting, there is an underlying similarity in how each author creates his desired effects, especially through the use of action that does not take place onstage. Strindberg uses offstage action, while Chekhov has utilized a technique that has been dubbed "indirect action." A second technique that both authors employ is character reflection: a technique wherein a character narrates about an event that has already passed. Through these two techniques, the authors demonstrate that offstage action and character reflection, when used effectively, bring forth the most in a play. In Strindberg's play, the culmination of drama occurs at the end of the play, when "the Count's back" (Strindberg 447). Instantly the mightiness of Jean crumbles to weakness. Both Jean and Miss Julie tremble at the return of the Count. They obviously fear him, implying that he holds dominion over them. ...read more.

Soon those two leave, then when asked for the identification of the buyer, Lopakhin answers, "I bought it" (Chekhov 51). That is it; the drama reaches its peak with that statement. All of the drama, all of the action-it all comes from the auction. "This moment... provides the most dramatic of all moments on-stage" ("ClassicNotes: The Cherry Orchard Act III"). Theater limitations were also an incentive to take advantage of the benefits of offstage action. For instance, the sale of the cherry orchard would have been too cumbersome to show onstage, since the auction is a grand event that would have incorporated excessive props, people, and planning. Similarly, the dance in Miss Julie is somewhat chaotic, too much to put onstage. The same goes for the arrival of the train in the opening and the chopping of the cherry orchard in the conclusion of The Cherry Orchard. Both the train and the tree are extremely gargantuan in size, which would be nigh on impossible to reproduce on a theater stage, especially considering the time period the plays were written: the late 19th century and early 20th century. Lastly, the use of indirect action brings about one final advantage: suspense and tension that cannot be achieved otherwise. The audience does not need to see the cherry orchard being chopped down, nor the suicide of Miss Julie. ...read more.

Coupled with some dialogue by Jean and Christine, this shows Miss Julie's rambunctious, lowly, and non-aristocratic behavior. Another significant example arises during the fiasco that Miss Julie and Jean have in the middle of the night. Like a storyteller, he tells the story of an event when young, how he "got sick once because... [he] couldn't have the... [girl he] wanted" (Strindberg 435). Revealing some of his feelings for her, the audience is additionally given some background information pertaining to the two. It is in this way that character reflection shines. As it stands, it is perhaps the most effective and practical method of giving background information about a character or the setting, et al., as well as, in the same token, behavioral attributes and other qualities of characters. Chekhov was well known for his use of indirect action. However, at the same time, Strindberg employs many of the same techniques. It is through this and character reflection that both playwrights exploit the imagination of the viewer. Invoking the viewer's imagination incidentally causes him or her to be more involved in the play, producing greater success. Both authors achieve this. The offstage action and the reactions of the characters to the offstage action appearing in both plays teach the audience "that visual action is superfluous, and indeed, unnecessary, next to the reactions of finely sculpted characters. ...read more.