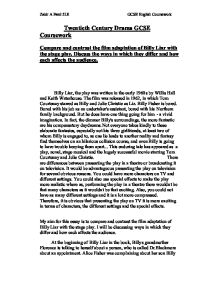 Compare and contrast the film adaptation of 'Billy Liar'with the stage play. Discuss the ways in which they differ and how each affects the audience.

Twentieth Century Drama GCSE Coursework Compare and contrast the film adaptation of 'Billy Liar' with the stage play. Discuss the ways in which they differ and how each affects the audience. 'Billy Liar', the play was written in the early 1960's by Willis Hall and Keith Waterhouse. The film was released in 1962, in which Tom Courtenay starred as Billy and Julie Christie as Liz. Billy Fisher is bored. Bored with his job as an undertaker's assistant, bored with his Northern family background. But he does have one thing going for him - a vivid imagination. In fact, the dimmer Billy's surroundings, the more fantastic are his compensatory daydreams. Not everyone takes kindly to these elaborate fantasies, especially not his three girlfriends, at least two of whom Billy is engaged to, as one lie leads to another reality and fantasy find themselves on an hilarious collision course, and even Billy is going to have trouble keeping them apart... This enduring tale has appeared as a play, novel, stage musical and the hugely successful movie starring Tom Courtenay and Julie Christie. There are differences between presenting the play in a theatre or broadcasting it on television. It would be advantageous presenting the play on television for several obvious reasons. You could have more characters on TV and different settings. You could also use special effects to make the play more realistic where as, performing the play in a theatre there wouldn't be that many characters as it wouldn't be that exciting. ...read more.

Unlike the script it shows the station, Billy's workplace, the town, the cafe where Rita works and the rooms in the house. The film expands the setting compared to the book as it is more exciting for the audience and the scenes are brought to life. The settings are so different because the most obvious problem was the stage setting. The book takes us round the town of Stradhoughton, its caf�'s, dance-hall, cemetery and much that is in the novel could not be shown on the stage. Therefore in the play you could have any sort of settings with special effects to make it more realistic/ The play script mainly focuses on Billy including his lies and his fantasies. It also focuses on his relationship with his girlfriends and also his relationship with his parents including his grandma. In the film they concentrate on Billy's family, his lies and his fantasies, but the film mainly concentrates on his relationship with his girlfriends. They mainly concentrate on that aspect, as most of Billy's problems in the film are his girlfriends. Obviously this would affect the audience. In the play script Billy doesn't get on with any of his family members including his grandmother. "He deserves a b****y good hiding..." "I've told him before, he can start coming in of a night or else go and live somewhere else..." The focus is different in the novel because in a play the themes about the girlfriends would be more interesting whereas in the play script it also focuses on his girlfriends but not as detailed. ...read more.