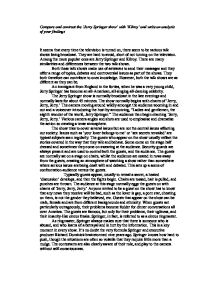 Compare and contrast the 'Jerry Springer show' with 'Kilroy' and write an analysis of your findings It seems that every time the television is turned on, there seem to be various talk shows being broadcast. They are hard to avoid, short of not turning on the television. Among the more popular ones are Jerry Springer and Kilroy. There are many similarities and differences between the two talk shows. Both these talk shows make use of airwaves to send their messages and they offer a range of topics, debates and controversial issues as part of the shows. They both therefore can contribute to ones knowledge. However, both the talk shows are as different as they can be. An immigrant from England in the forties, when he was a very young child, Jerry Springer has become an all-American, all-singing all-dancing celebrity. The Jerry Springer show is normally broadcast in the late evenings and normally lasts for about 45 minutes. The show normally begins with chants of 'Jerry, Jerry, Jerry.' The camera moving around wildly amongst the audience zooming in and out and a voiceover introducing the host by announcing, "Ladies and gentlemen, the eighth wonder of the world, Jerry Springer." ...read more.

He is really good at changing the subject, or sometimes if things look like they are going to erupt into an argument he is really good at diffusing the situation. Kilroy is a highly professional debate show host, who demonstrates humour, congeniality, compassion and a genuine understanding of the participants in his show, particularly if a sensitive subject is being tackled. Kilroy which is a British show, is screened between 9am and 10am every weekday on BBC1. This one-hour programme is on every weekday morning at 9.00am (BBC 1) and has an invited audience of about 100 people. There is a mixture of both male and female and it can be a mixture of different races. The audience are usually well dressed and don't swear. Each morning one particular subject is discussed and by far the majority of these subjects are about some aspect of personal relationships. The show begins with some soft music, which sets a very calm, yet serious atmosphere. Kilroy walks to the middle of the audience and the camera zooms in on him at eye level as he talks. This angle of shot creates equality, a friendliness between the host and the TV audience. The studio is well lit, clean and quite small and comfortable. ...read more.

In conclusion, although the Jerry Springer show and Kilroy are chat shows, the audience they are aimed at are totally different. The Jerry Springer Show is based on a feeling of superiority to the guest's mentality, whereas The Kilroy Show deals with the audience on a more equal level. The issues dealt with by both the shows are also different. The Jerry Springer Show makes no attempt to attack real issues, whilst Kilroy tries to deal with issues, which affect society as a whole. As the shows are aimed at completely different audiences, the attitudes of the hosts are also very different. Jerry Springer has a sarcastic attitude towards his guests and Kilroy tries his best to appear concerned with the problems of his guests. Like all chat shows, people only watch them to find out how sad other people's lives are to make them feel better about their own. It shows people from all walks of life, showing no prejudice against colour, size, shape or background. The Jerry Springer show is deliberately outrageous and he likes to have fun. Some call him patronising, some outright cannot stand him but because the show has been running a long time it has a firm place in the talk show world. Jay Sedani ...read more.