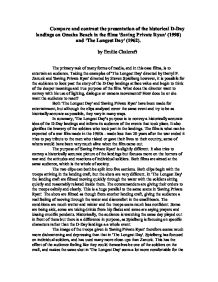 Compare and contrast the presentation of the historical D-Day landings on Omaha Beach in the films 'Saving Private Ryan' (1998) and 'The Longest Day' (1962).

Compare and contrast the presentation of the historical D-Day landings on Omaha Beach in the films 'Saving Private Ryan' (1998) and 'The Longest Day' (1962). by Emilie Chalcraft The primary task of many forms of media, and in this case films, is to entertain an audience. Taking the examples of 'The Longest Day' directed by Darryl F. Zanuck and 'Saving Private Ryan' directed by Steven Spielberg however, it is possible for the audience to look past the story of the D-Day landings at face value and begin to think of the deeper meanings and true purpose of the film. What does the director want to convey with his use of lighting, dialogue or camera movements? How does he or she want the audience to react? Both 'The Longest Day' and 'Saving Private Ryan' have been made for entertainment, but although the clips analysed cover the same event and try to be as histrically accurate as possible, they vary in many ways. In summary, 'The Longest Day''s purpose is to convey a historically accurate idea of the D-Day landings and inform its audience of the events that took place. It also glorifies the bravery of the soldiers who took part in the landings. The film is what can be expected of a war film made in the 1960s - made less than 20 years after the war ended it tries to pay tribute to the men who risked or gave their lives to their country, some of whom would have been very much alive when the film came out. ...read more.

about twenty-five seconds showing the troops disembarking from the landing craft whereas in 'Saving Private Ryan' the same scene takes around a minute and a half. 'Saving Private Ryan' is very realistic but, ironically, Spielberg uses 'unreal' techniques to achieve this; slow motion doesn't occur in real life but when it is used in the clip it works because it shows something beneath the surface of the action. Spielberg's audience is being shown the psychology of the scene and slow motion is used to explore workings of Hanks' mind. We look around the beach through his eyes, hear what he hears and experience it with him. A lot of emotion is evoked from the audience in this way. 'Real time' gives us a feeling of involvement in the scene and viewers are made to feel more 'connected' with the characters. In the next section of the clips the troops are getting on to the beach and running up towards the land. Both clips show in detail the injuries many soldiers receive and bring home to the audience some of the horrific deaths that were suffered by them. Brutal realism is widely used but especially in 'Saving Private Ryan'; the audience is shown open wounds, dying men and even a soldier picking up his own arm, all in a very graphic way. A big difference to be seen in this section of both the clips is first or third person 'narration'. ...read more.

By the introduction to the characters of the boy and his superior we start to care about their individual fates, and pathos is used over us to so that we become concerned over whether the characters live or die. Both directors use this to evoke sadness and pity among the audience. One of the most important aspects of the clips to analyse is the directors' presentation of war. 'The Longest Day' is an epic, giving an accurate, historical account of the D-Day landings. It conveys to the audience the bravery of the soldiers who fought in the war and the situations they had to deal with. A huge proportion of its original audience would have either fought in the war themselves or been closely related to someone who had, so the purpose of the film would have been to pay tribute to those people. The purpose of 'Saving Private Ryan' is different because almost none or even none at all of its audience would have fought in the war. Spielberg shows us the operation not just from a factual view but from an emotional view and shows us tragedies and horrors. Although the two clips cover exactly the same event we can see that they are very different in style, but even though they were made decades apart from each other there are also a similarities. By comparing and analysing these films so closely, we as an audience can begin to see into the directors' minds and realise their hidden purposes behind making the film. ...read more.