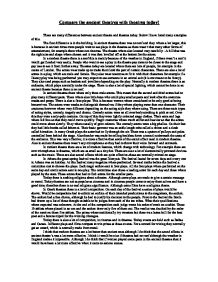 Compare the ancient theatres with theatres today! There are many differences between ancient theatre and theatres today. Below I have listed many examples of this. The first difference is in the building. In ancient theatres there was no roof and they where a lot larger, this is because in ancient times more people went to see plays in the theatres as there wasn't that many other forms of entertainment, for example there where not cinemas. The theatre where also located very carefully: -A hill that was the right size and shape where chosen and it was then levelled off at the bottom for the actors. In a modern theatre there is a roof this is mainly because of the weather in England, if there wasn't a roof it would get flooded very easily. People who want to see a play in the theatre pay more to be closer to the stage and pay less to see it from further away. ...read more.

Their arms and legs where left free so that they could move quickly. Tragic costumes where much stiffer and heavier so that the actors could move about slowly. They where usually of grim colours. The comedy actors wore a big p*****s. On their feet they had little books called kthornoi. Their basic garment was an ankle length robe called a chiton and a cloak called himaition. In many Greek plays the actor had to fly through the air. There was a system of pulleys and poles controlled from behind the stage. Also thunder was made be rolling boulders down a tunnel underneath the seats of the audience. This was very effective; it is more effective than some of the sound effect used in modern theatres. Also in ancient theatres there wasn't any microphones so they had to throw their voice forward and outwards. In modern theatre there are a lot of modern features, which change with technology. ...read more.

At the end of the competition each judge wrote his order of merit on a tablet. These 10 tablets where placed in an urn and the archon drew only five of them out. The verdict was decided by the order of the merit on these five tablets. The prizes where traditionally ivy wreaters but there was latera bull for the best poet and a bronze tripod for the winning choregos. Today there is also a lot of competition, in cinemas and in theatres. Today events are held such as Baftas and Oscars. Different plays and films compete to win prizes at these events. For a reward for wining they normally get an award, which is normally made from metal. I think that modern theatres are a lot better than ancient ones although I do think that the sound effects in ancient theatre's was a lot more effective. I think it would be nice if theatres had no roof although the weather in England makes it impossible. Although I do think that if women played some parts in the ancient theatres then it would have been a lot more effective when it came to serious scenes. ...read more.