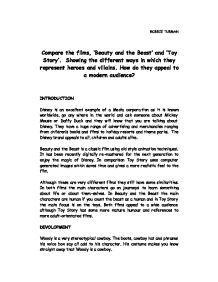 Compare the films, 'Beauty and the Beast' and 'Toy Story'. Showing the different ways in which they represent heroes and villains. How do they appeal to a modern audience?

ROBBIE TUBMAN Compare the films, 'Beauty and the Beast' and 'Toy Story'. Showing the different ways in which they represent heroes and villains. How do they appeal to a modern audience? INTRODUCTION Disney is an excellent example of a Media corporation as it is known worldwide, go any where in the world and ask someone about Mickey Mouse or Daffy Duck and they will know that you are talking about Disney. They have a huge range of advertising and merchandise ranging from children's books and films to holiday resorts and theme parks. The Disney brand appeals to all, children and adults alike. Beauty and the Beast is a classic film using old style animation techniques. It has been recently digitally re-mastered for the next generation to enjoy the magic of Disney. In comparison Toy Story uses computer generated images which saves time and gives a more realistic feel to the film. Although these are very different films they still have some similarities. In both films the main characters go on journeys to learn something about life or about them-selves. In Beauty and the Beast the main characters are human if you count the beast as a human and in Toy Story the main focus is on the toys. ...read more.

The toys were first seen as inanimate objects, Andy's playthings. This changes when the toys are 'alive', they are looked at from their perspective or from what they are seeing. When Buzz is first seen in the bedroom the camera angle changes to give him a look of superiority and power, the camera looks at him from a very low view and then slowly reveals the rest of his body. In the castle everything is very big compared to Belle to make her look smaller, when she is with the Beast you often see her from the Beasts point of view of from the side which makes her look smaller again. The use of lighting is also important, Andy's room is bright and colourful compared to Sid's bedroom which is dark and gloomy. Andy's room uses bright colours well such as the blue for the walls. Sid's room has a dark green light on and appears to be black, there are lots of luminous posters on the well too. There is a clear contrast between the two characters and their environments. Beauty and the Beast is similar, the prince/beast begins as the villain. ...read more.

The plots differ as Beauty and the Beast is a love story, the Beast has to win Belle's heart to gain his and his servant's old life back, Toy Story is more about getting along with people and working as a team. At first Woody feels threatened and jealous of Buzz but learns that they can get along and work together as a team. They are similar as in both stories the characters have to go on journeys to learn about themselves. Woody's and Buzz's takes them around there town but Belle and the Beasts stays in the castle and its grounds. Both sets of characters learn a lesson by the end of the films. There is a lot more talking in Toy Story whereas in Beauty and the Beast things just happen or are told in song. Another similarity is that in both films, everything goes right at the last possible moment, Buzz and Woody getting back to Andy while they are on the way to the new house and Belle telling the Beast she loves him as he dies and the last petal falls. The plots appeal to audiences because all though Toy Story is aimed at children it has lots of more mature jokes and scenes; these help it appeal to a wider audience. ...read more.