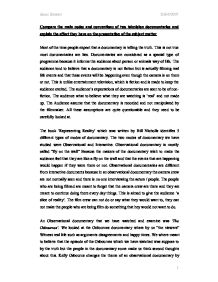 Compare the main codes and conventions of two television documentaries and explain the effect they have on the presentation of the subject matter.

Compare the main codes and conventions of two television documentaries and explain the effect they have on the presentation of the subject matter Most of the time people expect that a documentary is telling the truth. This is not true most documentaries are lies. Documentaries are considered as a special type of programme because it informs the audience about person or animals way of life. The audience tend to believe that a documentary is not fiction but is actually filming real life events and that these events will be happening even though the camera is on them or not. This is unlike entertainment television, which is fiction and is made to keep the audience excited. The audience's expectations of documentaries are seen to be of non-fiction. The audience what to believe what they are watching is 'real' and not made up. The Audience assume that the documentary is recorded and not manipulated by the filmmaker. All these assumptions are quite questionable and they need to be carefully looked at. The book 'Representing Reality' which was written by Bill Nicholls identifies 5 different types of modes of documentary. ...read more.

Every one had specific places to sit so that they never turned their back to the camera. This was obviously well planned and edited. We also see that entertainment values were kept in such as tension and anger, when their daughter got a tattoo. The Americans use opening sequences of music to suggest the theme and to depict the Osbournes family. At the beginning of take non-digetic music is played to suggest the mood of that sequence. The audience gain pleasure from the Osbournes because they get to see thing that they would not normally see in their lives, such as when Ozzy Osbourne was able to lets us go back stage with him on TRL. The audience also get pleasure to see the pain, pleasure and problems of the Osbournes family. Interactive Documentary is where the filmmaker plays an important role in the film itself. The person in the documentary gives his or her trust to the filmmaker to ask him or her all the questions that 'we' the audience would like to know. ...read more.

Bashir also tends to point out to Michael how much he is spending; this looks like Bashir is trying to play a fatherly figure towards Michael. Bashir tries to get Michael to talk about his past and all the pains he went through when he was a child. In this documentary we saw that Martin Bashir ask Michael some deep questions which in turn made Michael cry. This was not nice because Michael opened up to Bashir and Bashir did not seem to care. You can see that was Michaels true feelings. Although this was his true feelings it seemed that Bashir did this on purpose to satisfy the audience, to get some sort of re This Documentary was turned into entertainment because Martin Bashir edited it this made it turned into fiction. Also he deleted some scenes, which we needed to know because these take included important information, which we needed to know about Michael Jackson, such as, "how many nose jobs did Michael Jackson have on his nose". The audience enjoy this type of documentary because 'we' get to find out more about the person and also 'we' get to find out what more about the person's feelings. Jason Stewart 20/04/2007 1 ...read more.