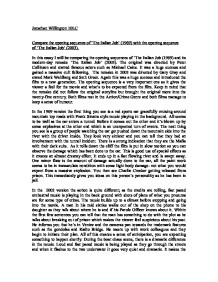 Jonathan Willington 10LC Compare the opening sequence of 'The Italian Job' (1969) with the opening sequence of 'The Italian Job' (2003). In this essay I will be comparing the opening sequences of 'The Italian Job (1969) and its modern-day remake 'The Italian Job' (2003). The original was directed by Peter Collinson and starred famous actors such as Michael Caine. It was a huge success and gained a massive cult following. The remake in 2003 was directed by Gary Gray and stared Mark Wahlberg and Seth Green. Again this was a huge success and introduced the film to a new generation. The opening sequence is a very important one as it gives the viewer a feel for the movie and what's to be expected from the film. Keep in mind that the remake did not follow the original storyline but brought the original more into the twenty-first century. Both films rest in the Action/Crime Genre and both films manage to keep a sense of humour. In the 1969 version the first thing you see is a red sports car gracefully cruising around mountain top roads with Frank Sinatra style music playing in the background. All seems to be well as the car enters a tunnel. Before it comes out the other end it's blown up by some explosives at the other end which is an unexpected turn of events. The next thing you see is a group of people watching the car get pushed down the mountain side into the river with the driver inside. ...read more.

The characterisation was carried out successfully in both films with strong identities given to the main characters. In the '03 version John Bridger comes across as a very kind and caring father and you would not suspect that he would be involved in a mass crime. This helps get the audience on their side because if they can portray him as a good guy and a caring family man it will make the actions later on in the film more effective because they have taken a liking to him. Charlie Crocker in '69 was given a James Bond style role, very slick and a charmer with the women. He seems to take everything in his stride, is very confident but yet remains polite and well-mannered. The way he casually strolls out of prison and says goodbye to the police officers shows a bit of cheek but is said in such a way that no offence was really taken. The Charlie Crocker in '03 was slightly more developed. To me he seemed more quiet and shy no longer the over over-confident ego he was in '69. The character was joined by a group of around five this time who played an equal part in the crimes so he wasn't seen as the only good guy but the controller of a formidable group. All of the other members of the group had their own distinctive personalities and weren't simply extra characters as they had their own contributions to the plot. ...read more.

Having an original storyline will not upset the old audiences, meaning they can have more independence on the plot instead of having to make sure everything is the same as it was thirty years ago and a final thing to keep in mind-make sure it still has a sense of humour as that was one of key factors all from all those years ago. The film was rated as a "12" in Britain. As they were targeting teenagers and young adults of both sexes they didn't want to appeal to anyone under the age of twelve. In my opinion there is large difference in peoples reactions towards the age certificates. I am more drawn to a film with a "12"certificate than a "PG" for example because I know there is a larger chance of action, violence and bad language. If it was rated a "PG" they could loose some of the younger teen audience and would have to censor some of the action and violence. In conclusion I thought the remake was successfully done, incorporating elements of action, crime, light comedy and suspense all into one to make an enjoyable film which shouldn't have offended too many of the old fans. Personally, I preferred the soundtrack in the '03 version as it added more to the feel of the film. The mise-en-scene was very effective, the settings in both were believable and the plots fitted well. The acting was of a high standard in both and Charlie Crocker seemed to mature over the gap from a womanising, cocky individual into a team leader who had gained everyone's respect. ...read more.