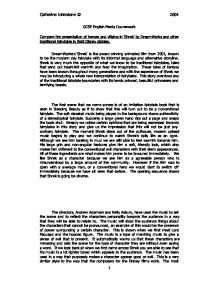 Compare the presentation of heroes and villains in 'Shrek' by DreamWorks and other traditional fairytales in Walt Disney stables.

GCSE English Media Coursework Compare the presentation of heroes and villains in 'Shrek' by DreamWorks and other traditional fairytales in Walt Disney stables. DreamWorks's 'Shrek' is the award winning animated film from 2001, known to be the modern day fairytale with its informal language and alternative storyline. Shrek is very much the opposite of what we know to be traditional fairytales, tales that send out heart-felt warmth and feed the imagination. These tales of fantasy have been known throughout many generations and with the experience of Shrek we may be introducing a whole new interpretation of fairytales. This story overrides any of the traditional fairytale boundaries with its heroic princes', beautiful princesses and terrifying beasts. The first scene that we come across is of an imitation fairytale book that is seen in Sleeping Beauty as if to show that this will turn out to be a conventional fairytale. The soft classical music being played in the background shows authenticity of a stereotypical fairytale. Suddenly a large green hand rips out a page and snaps the book shut. Already we notice certain opinions that are being expressed towards fairytales in this story and give us the impression that this will not be just any ordinary fairytale. ...read more.

These are some of the typical sayings that we are familiar with due to the traditional fairytales such as Jack and the Beanstalk. He does not set out on the expedition to save the princess because he is in love, as is usual in tradition fairytales. He goes on the adventure because he is forced to due to circumstances beyond his control. The Prince in Sleeping Beauty, a standard fairytale, rescues Sleeping Beauty because he is "in love" with her. When Sleeping Beauty was written the target audience would have been extremely contented with the way the beautiful man and woman fall in love and "live happily ever after". Shrek does not appear to be anything like a hero at the start of the film. He is very harsh with Donkey, and he is very rude to anyone who tries to invade his personal space. He is a very lonesome character who is not liked by almost every other character due to the reputation of ogres in usual fairytales. However as the film progresses and we learn more about Shrek, we realise that although he doesn't look like a hero, deep down he possesses all of the personality traits of a hero as well as having the heart of a hero. ...read more.

They are also used to misrepresent the characters in the film and to make you view the film in a certain way. The first view of Lord Farquaad is from a low camera angle to give us the impression of being tall and powerful, and thus more like an ordinary villain or evil character. However this is unrepresentative of his true height and in a way is already mocking his stature. The directors use different points of view to change the way that the characters are seen. In stereotypical fairytale the hero's and villains would be viewed in ways to exaggerate their appearances, but Shrek deliberately distorts the way you watch the film. This is to keep attention and to bring a funny side to the way the film was produced. In conclusion, Shrek is a modern fairytale, which allows a contemporary audience to relate to its morals and messages. The characters are not uniform with traditional fairytales but all of the components of the stereotypical story are there. The fact that certain aspects are disguised means that the film can offer different significances to people of different age groups and different backgrounds. It covers a wider range of subject matter, which allows it to offer a lot more than conventional fairytales. Catherine Johnstone :) 2004 1 ...read more.