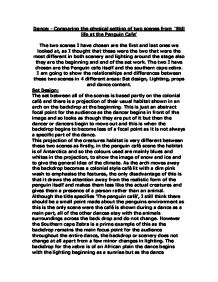 Comparing the physical setting of two scenes from 'Still life at the Penguin Cafe'.

Dance: - Comparing the physical setting of two scenes from 'Still life at the Penguin Cafe' The two scenes I have chosen are the first and last ones we looked at, as I thought that these were the two that were the most different in both scenery and lighting around the stage also they are the beginning and end of the set work. The two I have chosen are the Penguin cafe itself and the southern cape zebra. I am going to show the relationships and differences between these two scenes in 4 different areas: Set design, Lighting, props and dance content. Set Design: The set between all of the scenes is based partly on the colonial caf� and there is a projection of their usual habitat shown in an arch on the backdrop at the beginning. This is just an abstract focal point for the audience as the dancer begins in front of the image and so looks as though they are put of it but then the dancer or dancers begin to move out and this is when the backdrop begins to become less of a focal point as it is not always a specific part of the dance. ...read more.

The follow spots remain on the dancers as they travel around the stage, but towards the end of the dance the spots become larger as more dancers are introduced. To highlight the edges and centre of the stage Yellow spots are used this is the only fixed stage lighting used on the stage. In the southern cape zebra scene the dancer is covered by three different styles of lights a full colourless wash, a central spotlight or for a brief time a follow spotlight. The backdrop is lit by a pink / purple wash to create the effect of a sunrise, as the dance progresses the backdrop light gradually dims and eventually at the end of the dance a blackout is used. At the beginning to separate the dancer from the backdrop a central spotlight is used because at the beginning the main focal point is the African plain backdrop, because the zebra does not appear predominantly in the beginning as his starting position is on the floor. The central spotlight is used to allow the audience to focus on one specific dancer, separating him from other dancers, the backdrop and other areas of the stage. ...read more.

Their care - free attitude shows how unaware they are of how under threat they are. The penguin dancers are wearing trousers low down to give the effect of the restricted leg movement of the penguin and their technique of travel. Unlike the care - free moves and attitude of the penguin the zebras movements are very abrupt, the dancer gives the impression that the zebra is aware that he is under threat and that he always has to be alert no matter what activity they are doing. The sharp head movements used give this impression, they play an important part in this scene, as this is one of the repeated movement used to create the realistic effect of the zebra reacting to its surroundings. The zebra uses expansive movements rather than the restricted movements of the penguin, the dancer uses all parts of the body to produce the movements so that the reach of the movements is more extended than that of a typical body form. The two specific body part used were the head and the spine, this was used to create the image of the zebra travelling but the dancer still remained in the same place and did not move when producing these movements. ...read more.