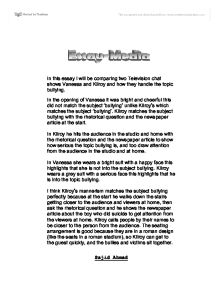 In this essay I will be comparing two Television chat shows Vanessa and Kilroy and how they handle the topic bullying. In the opening of Vanessa it was bright and cheerful this did not match the subject 'bullying' unlike Kilroy's which matches the subject 'bullying'. Kilroy matches the subject bullying with the rhetorical question and the newspaper article at the start. In Kilroy he hits the audience in the studio and home with the rhetorical question and the newspaper article to show how serious the topic bullying is, and too draw attention from the audience in the studio and at home. In Vanessa she wears a bright suit with a happy face this highlights that she is not into the subject bullying. ...read more.

The seating arrangement is good because they are in a roman design (like the seats in a roman stadium), so Kilroy can get to the guest quickly, and the bullies and victims sit together. In Vanessa the seats are not in roman design so Vanessa could not get to the guest quickly. Vanessa discussion on bullying is only a segment of a show, so Vanessa can not go into the subject 'bullying' into enough depth. Kilroy is dedicated to the topic 'bullying' because if it was a segment then Kilroy will not go into enough depth about the topic bullying. In Vanessa the first person she interviews is the victim and he tells the audience about his problem, this shows how serious the topic is because he was emotional and this made the audience feel sad and angry. ...read more.

In Kilroy the whole audience takes part in the topic bullying, this affects the style of the programme because the audience want to express their emotion, because this is a really serious topic. In Vanessa they only have a few people taking parting the topic bullying. The most successful programme is Kilroy because he is dedicated to the topic bullying and this was a large programme based on bullying not a segment. He brings attention by the rhetorical question and the article at the start. The seating arrangement was good because it was in a roman design not squashed up like the seats in Vanessa. He had good camera shots and angles. He also brings specialist to the studio for the audience to discuss the topic 'bullying'. Sajid Ahmad ...read more.