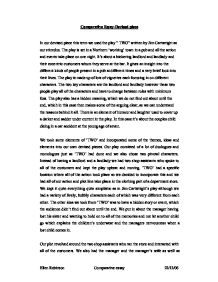 In our devised piece this term we used the play “ TWO” written by Jim Cartwright as our stimulus. The play is set in a Northern ‘working’ town in a pub and all the action and events take place on one night. It’s about a bickering landlord and landlady and their eccentric customers whom they serve at the bar. It gives an insight into the different kinds of people present in a pub at different times and a very brief look into their lives. The play is made up of lots of vignettes each focusing in on different characters. The two key characters are the landlord and landlady however these two people play all of the characters and have to change between roles with minimum fuss. The play also has a hidden meaning, which we do not find out about until the end, which in this case then makes some of the arguing clear, as we can understand the reasons behind it all. There is an element of humour and laughter used to cover up a darker and sadder under current in the play. In this case it’s about the couples child dieing in a car accident at the young age of seven.

We took some elements of ‘TWO’ and incorporated some of the themes, ideas and elements into our own devised pieces. Our play consisted of a lot of duologues and monologues just as ‘TWO’ had done and we also chose two pivotal characters. Instead of having a landlord and a landlady we had two shop assistants who spoke to all of the customers and kept the play upbeat and moving. ‘TWO’ had a specific location where all of the action took place so we decided to incorporate this and we had all of our action and plot line take place in the clothing part of a department store. We kept it quite everything quite simplistic as in Jim Cartwright’s play although we had a variety of lively, bubbly characters each of which was very different from each other. The other idea we took from ‘TWO’ was to have a hidden story or event, which the audience didn’t find out about until the end. We put in about the manager having lost his sister and wanting to hold on to all of the memories and not let another child go which explains the children’s underwear and the managers nervousness when a lost child comes in.

Our plot revolved around the two shop assistants who ran the store and interacted with all of the customers. We also had the manager and the manager’s wife as well as mimed and imagined people out in public, in the shop and on the bus. The only props we used were chairs, a table, two umbrellas, some notebooks and a mesh curtain, which we used in the changing room scene. We chose to keep it quite simple so the audience had to believe in what was going on and focus on the acting rather than the material props just as was done in ‘TWO.’ The hidden idea was that the manager seemed to have paedophilic tendencies but all of this was covered up as we made him into a really funny, friendly and all round “Mr nice guy” type character. He is very attached to his laptop and spends a lot of time away from his family and at work. The two shop assistants are lively and bubbly characters who discuss boys, clothes and underwear. They see all of the different shoppers come in and out. They start off in the morning unpacking underwear and putting it on display and having a bit of a joke with their boss about the different sizes. We also see a woman looking for a cat suit come in and have a bit of a discussion about the different colours and how she really likes them. The wife then comes in to speak to her husband and when he refused to come out for lunch with her she has a monologue about how she feels unloved. Each monologue ends with something about being trapped whether its in a job, relationship or time. At the end it all comes together and makes sense.

We then move on to a woman coming in with her daughter and trying to fit her into a really small sized top.  They end up talking about the daughter’s dad and how he was so controlling before she end up getting stuck in the top. The assistants leave to get some scissors but while they are gone the manager goes in and grabs the girl. There is a tabloid and then the girl goes into the centre of the stage and all of the other characters gather around her. They begin walking round in a circle pushing the girl onto the floor whilst saying “ trapped” over and over again getting louder each time until everyone shouts “ TRAPPED” and puts a hand over the girls head. The position is held for about five seconds and then the play ends.

In ‘TWO’ we identified that there were feelings of abuse, hate, anger, guilt, memory and sadness.  We tried to use these feelings in our own piece. We put the anger and hate into the daughter hating her dad and her mum hating her talking about it. The guilt and the memory went into the manager and his memories of his sister’s last breaths before she died and the abuse was particularly prominent at the end when the manager grabbed the girl. The themes of hidden memories being brought up again was obvious with finding the small children’s underwear marking the beginning of out of control feelings, which just escalate until the very end of the play.

Having read ‘TWO’ as a play I think it is very cleverly written and constructed. When you read the notes at the beginning of the script it describes it as being a play about the different characters that come into a pub one evening. Immediately you begin to think how that could possibly be interesting or made into a play so after reading it you realise how cunning Jim Cartwright is and how clever to make something so simple so interesting, effective and evocative.  The contrast in characters keeps the audience interested in what’s going on and also provides something to think about. The way two characters can play so many roles is something I have never really seen before and is fascinating. Jim Cartwright has used mime very effectively so the audience’s experience of the play is a very different one to what they would get fm other for fictional plays.

I thought the ideas for our devised piece were really good overall but we needed to develop the characters more and maybe make parts of it have more emphasis and a bit clearer, for example I think the managers monologue about his sister needed to be clearer and maybe the wife’s monologue should have emphasised her worries and his strange behaviour more. I think the end performance went quite well and the audience seemed to enjoy it. We all tried really hard not to laugh at any of it even when the audience laughed which we managed to do so we were all please with that. We did use lighting and I think that worked well because it highlighted important bits of the play and also whom the focus was on as well as the mood. So at the end when we were doing the last ‘trapped’ scene we had the lights down quite low to give it more effect and make it a bit eerie and scary.  I think we used some of the key elements from ‘TWO’ and incorporated them into our piece well and subtly and we had a good plot line with a surprise at the end.