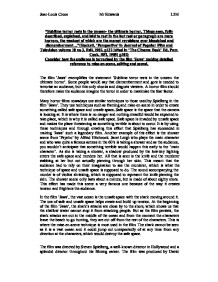 Consider how the audience is terrorised by the film Jaws making detailed reference to mise-en-scene, editing and sound.

"Sublime terror rests in the unseen- the ultimate horror. Things seen, fully described, explained, and laid to rest in the last reel or paragraph are mere horrors, the weakest of which are the merest revulsions over bloodshed and dismemberment..."(Rockett, 'Perspective' in Journal of Popular Film and Television volume 10 no 3, Fall, 1982, p132 [cited in 'The Cinema Book' Ed. Pam Cook, BFI, 1985] p102) Consider how the audience is terrorised by the film 'Jaws' making detailed reference to mise-en-scene, editing and sound. The film 'Jaws' exemplifies the statement 'Sublime terror rests in the unseen- the ultimate horror'. Some people would say that dismemberment and gore is needed to terrorise an audience, but this only shocks and disgusts viewers. A horror film should therefore make the audience imagine the terror in order to maximise the fear factor. Many horror films nowadays use similar techniques to those used by Spielberg in the film 'Jaws'. They use techniques such as framing and mise-en-scene in order to create something called safe space and unsafe space. Safe space is the space that the camera is looking at. ...read more.

During the summer season, a great white shark starts attacking people who go for a swim in the sea. After the first incident, it is thought that it was a shark attack and Officer Brody tries to close the beach down, but the mayor insists on keeping it open as it is a few days to the 4th of July, which is Independence Day. This would bring many tourists which would be good for the island as it is entirely based on tourism. The celebration still goes on, but on the day itself, a man is attacked and killed by the shark. As this is the fourth shark attack, a shark hunter (Quint) and a shark expert (Hooper) are brought in to kill the shark. During the opening scene, a group of young people are gathered around a fire drinking and smoking. The sound is hippy and party like with guitars, people talking and rhythmic waves splashing. The camera keeps on going from a boy to a girl, each shot lasting one second. A couple from the beach party leave the rest to go skinny-dipping; Spielberg only films about ten minutes before sunset. ...read more.

These days, people have got used to seeing gory, revolting, computerized monsters in films and have hence become desensitised. Nowadays, horror genre films tend to try to relate to wickedness, evil, immorality, strange happenings such as murder, which are set in a haunted houses or even a typical residence. In contrast, horror films in the olden days used to be about witchcraft, monsters, werewolves and vampires that were maybe set in an ancient castle on top of a cliff as people used to believe in all these fantasies. A good horror film would have be like a roller coaster because it would need to keep building up the tension and releasing it every little while to make it interesting for an audience to watch. It is also thought to be like a roller coaster because you do not know what is coming next, which is similar to how some horror films are presented. This is a key factor which makes horror films like 'Jaws' successful. In addition, 'Jaws' exploits filming techniques and other methods and combines them well together to make the film realistic. These combined factors terrorize the audience as a whole, making 'Jaws' awe-inspiring. ?? ?? ?? ?? Jean-Louis Croos Mr Edwards L5M ...read more.