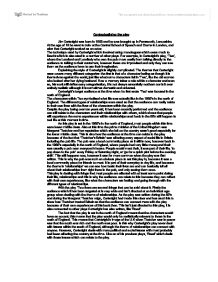 Contextualising the play Jim Cartwright was born in 1958 and he was brought up in Farnsworth, Lancashire. At the age of 16 he went to train at the Central School of Speech and Drama in London, and after that Cartwright worked as an actor. The technique used by Cartwright which involved using monologues which owes much to Brecht which is also used in a number of other plays. For example, in Cartwright's play, 'Two', where the Landlord and Landlady who own the pub move easily from talking directly to the audience to talking to their customers, however these are improvised and only they can see them as the audience have to use their imagination. Explaining the style of Cartwright is slightly complicated. The themes that Cartwright uses covers many different categories: the first is that of a character feeling as though it is themselves against the world, just like what some characters felt in 'Two', like the old woman who looked after her dying husband. ...read more.

People would meet their, it was part of their life, 'to pop down to the pub' every Friday or Saturday night, or 'go for a quick pint before the evening shift'. This still happens now, however it was far more common when the play was first written. This is why the pub was such an obvious place to set this play in, because it was a local community place for friends to meet. It is part of their everyday to day life, and because the theme is 'relationships' we can see how basic their lives are and can basically tell all about their relationships from right there in the pub, and only seeing them once. This play is dealing with things that most people are affected with at least some point during their life, relationships and this is why the audience can relate to this because they can reflect with their own experiences, like what the characters are feeling and going through with the different types of relationships. ...read more.

The play is still performed at this present day and is still very relevant to those today because of the theme of the play, relationships which is very relevant to those today in everyday life as it deals with several forms of relationships and the problems they involve. I think this play would still be relevant to those in the future as much as it does now and back when it was first written in the 1980's and many years after that. The play deals with issues from domestic violence, to losing a wife, finally getting engaged to the man you love, to looking after a loved one with a life threatening illness. The issue between the Landlord and Landlady is that their child dies at the age of seven. This helps those who have experienced this or a similar experience, and shows that relationships can still work out no matter what, as this is shown between them at the very end of the play, and the last sentences said by both of them towards each other were, 'I love you'. ...read more.