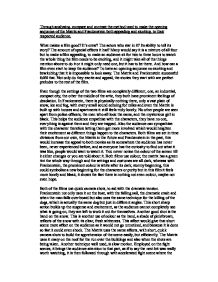 Contrast the method used to make the opening sequence of the Matrix and Frankenstein both appealing and exciting, to their respected audience.

Through analysing, compare and contrast the method used to make the opening sequence of the Matrix and Frankenstein both appealing and exciting, to their respected audience. What makes a film good? It's crew? The actors who star in it? Its ability to tell its story? The amount of special effects it has? Many would say it is a mixture of all four but to make a film appealing, to make an audience sit for two to three hours to watch the whole thing the film needs to be exciting, and it might take all of the things mention above to do it or it might only need one, but it has to be there. And how can a film even start to keep the audience? To have an opening sequence so exciting and bewitching that it is impossible to look away. The Matrix and Frankenstein successful fulfil that. Not only do they excite and appeal, the stories they start with are perfect preludes to the rest of the film. ...read more.

Both of the films use quick camera shots, to aid with the dramatic tension. Frankenstein not only uses it on the boat, with the falling sail, the dramatic crash and when the man falls over board but also uses the same technique for the killing of the dogs, which is actually the same dog but just in different angles. This short sharp action builds up the suspense and excitement, as the audience cannot completely see what is going on, they are left to work it out for themselves. Another good shot is the hand on the snow. This is another use of colour as the hand, a shade of pink/brown, reflects of the snow with its clear, fresh whiteness. This affect would give that short scene more affect on the audience as it would not go unnoticed, and because it is done so fast it could even shock. The Matrix uses the same affects, with short, quick camera shots to build the apprehension of the scene easily, but efficiently. ...read more.

The sound effects on both films work well too. The constant ringing on the Matrix, not only intrigues but like the music and the camera shots, adds to the tension. The creaking of the boat is another good example of a well used sound effect it really helps the audience to place itself in the film. The yelping of the dogs and the mystic growl in the fog are very cleverly used, as the fog takes away one of the senses, sight, the other need to improve, so they can understand what is going on, again increasing the audiences involvement in the film. Both films use arrangements of techniques to not only keep the audience but to stimulate and appeal to them. The two films are very different in many ways, the settings, the time periods, and the layouts and maybe even their respected audiences, but they both start with extremely thrilling beginnings to rival each other. Not only is colour used in both, but also messages on the screen, costume and camera shots as used heavily in aid of the tension running through the two. The beginnings are successful, and intrigued and stick the audience so they have to find out the end. ...read more.