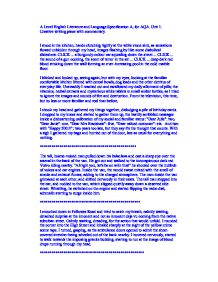 A Level English Literature and Language Specification A, for AQA. Unit 1. Creative writing piece with commentary. I stood in the kitchen, hands clutching tightly at the white stone sink, as sensations flowed unbidden through my head, images flashing by like some diabolical slideshow. CLICK ... a burgundy-colour car squealing down the street ... CLICK ... the sound of a gun cocking, the scent of terror in the air ... CLICK ... deep dark red blood stroking down the wall forming an ever-increasing pool in the cold marble floor. I blinked and looked up, seeing again, but with my eyes, looking at the familiar comfortable kitchen littered with cereal bowls, dog leads and the other detritus of everyday life. Unsteadily I reached out and swallowed my daily allotment of pills; the vitamins, herbal extracts and mysterious white tablets in small amber bottles, as I tried to ignore the images and sounds of fire and destruction. From the television, this time, but no less or more familiar and real than before. I shook my head and gathered my things together, dislodging a pile of birthday cards. I dropped to my knees and started to gather them up, the hastily scribbled messages inside a disheartening calibration of my social and familiar status: "Dear Julie": two. ...read more.

prattled the sincere looking blonde in the smart suit ("well, I was, um, I was just standing here") waving her microphone while casting furtive glances around for someone more outgoing to interview. "...wondering what was going on," the meek-faced brunette continued, "and, oh, obviously, er, someone had called the police, um..." Bill sat up, mouth opening and closing like a fish, gesturing wildly towards the kitchen. "'Ere, you'll never guess who's on the telly! Jules, and looking like a b****y zombie!" He heard footsteps behind him, and a gasp, but ignored it, leaning forward eager to enjoy the show. Commentary My piece is intended as the beginning of a novel or a short story aimed an adult audience, describing the intertwining lives of Mrs Julie Bradshaw, an ordinary suburban woman who may or may not have psychic abilities, and a group of bank robbers. I chose to take this approach not only because it was one I found interesting, but because although the source material clearly shows that a bank robbery has taken place, the main 'character' is not directly involved in the action. I used this device as a way of involving her and making her the main character in the story. I used the technique of alternating between the different viewpoints; Julie (in the first person), the bank robbers and Julie's family (both in the third person) ...read more.

Certain details such as "Fellowes Road" and "yellow crime scene tape" have been used from the source. The use of the phrases, "innocent and not so innocent deja vu" and "native street" suggest the street is familiar to her, but that sense of familiarity is harmless (because she is from that area) but also have a darker meaning (because she has seen it in her visions). The adverbs "hovered nervously" and "gasping" suggest her fragile mental state at that moment. The last segment takes place in the home of a relative of Julie's who is shocked to see her on the television news. The man has the same surname, leaving the audience to question his relationship to Mrs Bradshaw. Is he her husband? Ex-husband? Blood relative and she uses her maiden name? The lexis used is more basic, and adjectives like "callused hands" and "overstuffed sofa" give the impression this is a simple, working class household. The dialect used towards the end ("'Ere," "telly" and "b****y") reinforce this. The excerpts from the television news are taken from the source material, and are used to emphasise the difference between Julie, who "ums" and "ahhs" and the TV reporter, who "prattles" (evoking a mental image of the stereotypical superficially sincere but glossy TV presenter) but does not miss a word). By doing this the reader gets a firmer impression of Julie's personality and how she appears to the outside world. A further physical description is given with the adjective "meek faced brunette." ...read more.