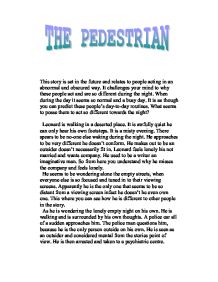 This story is set in the future and relates to people acting in an abnormal and obscured way. It challenges your mind to why these people act and are so different during the night. When during the day it seems so normal and a busy day. It is as though you can predict these people's day-to-day routines. What seems to posse them to act so different towards the night? Leonard is walking in a deserted place. It is awfully quiet he can only hear his own footsteps. It is a misty evening. There spears to be no-one else waking during the night. He approaches to be very different he doesn't conform. He makes out to be an outsider doesn't necessarily fit in. Leonard feels lonely his not married and wants company. He used to be a writer an imaginative man. So from here you understand why he misses the company and feels lonely. He seems to be wondering alone the empty streets, when everyone else is so focused and tuned in to their viewing screens. Apparently he is the only one that seems to be so distant from a viewing screen infact he doesn't he even own one. This where you can see how he is different to other people in the story. As he is wondering the lonely empty night on his own. ...read more.

The author uses the word Phantoms This is used to describe people being hypnotised and having any control over their life. The last line of this story the author mentions the word chill. This is not only seen as chill in the temperature but also in fear as well. The question is never really answered referring back to the start. Where I wrote what posses these people to act so different? You can only have a few judgements of what is the answer due to the amount of evidence given. This story is set in the future and relates to a thrill show. The hired killers pursue the contestant. The contestants mission is to survive a week and receive a phenomenal amount of money two hundred thousand dollars. While being pursued by hired killers, the killers are armed the contestant is left defenceless. As the hired killers are hired they are granted immunity for life. So this gives them a great opportunity to do anything knowing they will be considerably protected. Jim the character and contestant of the story has survived the week but has little as four and a half hours to go. He is running around searching for some place to protect himself. He has been shot. As being broad minded as anyone else he heads to the church for sanctuary. ...read more.

In the Pedestrian people are seen as though they have been hypnotised and are completely focused on the large viewing screen. They don't seem to have any interest in anything else in life, apart from watching the screens all night. It's quite strange to notice that household members have one and every household member is addicted and attracted to them. In the prize of the peril it is different. But it still contrasts with life entertainment. In the pedestrian it is seen as life entertainment by watching these huge viewing screens. Whereas in The prize of the peril it refers to real murder, live murder. People seem to be interested in seeing people killed for real, it is seems as though they enjoy the reality of this thrill show. They want to see more, they have become addicted to seeing people killed, they see it as harmless entertainment. It doesn't appear to be a hopeful view on human nature. They want to see people dead/killed. The more you feed their imagination the more they actually want. After concluding both stories, I realised the similarities. They were both cut down to two main aspects of life. They were both seeing and believing life entertainment was all that life surrounds and what life is about. Also that life is being structured and set out in a very different way. They both deal with television and getting entertainment in a passive way. These pessimistic stories don't hold much hope. ...read more.