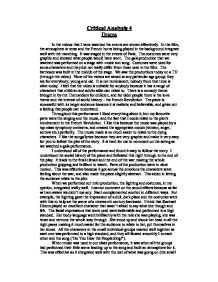 Critical Analysis 4 Drama In the videos that I have watched the events are shown effectively. In the film, the atmosphere is tense and the French horns being played in the background integrate well with the marching. It was staged in the streets of Paris. The costumes were very graphic and showed what people would have worn. The gala production that we watched was performed on a stage with music and song. Costumes were used for some characters and they did not really differ from those used in the film. The barricade was built in the middle of the stage. We saw the productions today on a TV (through the video). None of the videos are aimed at any particular age group; they are for everybody; young and old. It is not reminiscent; nobody from that time is alive today. I feel that the video is suitable for anybody because it has a range of characters that children and adults alike can relate to. ...read more.

I understood all of the performance and found it easy to follow the story. I understood the social history of the piece and followed this right through to the end of the play. It leads to the final climax and the end of the war making the whole production gripping and brilliant to watch. Parts of the production were in slow motion. This was effective because it got across the emotions the characters were feeling about the war, and also made the piece slightly abstract. This aided in letting the audience relate to the plot. When we performed our mini production, the lighting and costumes, in my opinion, integrated really well. I cannot comment on the sound effects because as far as I am aware we didn't use any. Each complemented another in different ways. For example, the lighting gave the impression of a dull, dark place and the costumes went with this to help set the scene of a nineteenth century barricade. ...read more.

It really wakes the audience up after the quiet acting. Finally, if I was directing this performance, I think that I would make a few minor changes. I would add more colour to the set, possibly by adding a flag like in the videos. This would be a focal point for the audience to look at, directly in the centre of everything. I would definitely have more people wearing costumes to make sure the theme of the French Revolution was captured and portrayed. One last thing that I would change is the order that the groups go in. I would put five before the song and five after. The groups after the song would preferably be those in which people died. This didn't matter though when we performed because we used a stage workshop. Apart from this, that is all I would change as I think the choice of song fits in really well, and the lighting is extremely effective. ...read more.