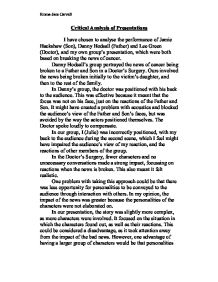 Critical Analysis of Presentations - I have chosen to analyse the performance of Jamie Hackshaw (Son), Danny Hodsall (Father) and Lee Green (Doctor), and my own group's presentation, which were both based on breaking the news of cancer.

Critical Analysis of Presentations I have chosen to analyse the performance of Jamie Hackshaw (Son), Danny Hodsall (Father) and Lee Green (Doctor), and my own group's presentation, which were both based on breaking the news of cancer. Danny Hodsall's group portrayed the news of cancer being broken to a Father and Son in a Doctor's Surgery. Ours involved the news being broken initially to the victim's daughter, and then to the rest of the family. In Danny's group, the doctor was positioned with his back to the audience. This was effective because it meant that the focus was not on his face, just on the reactions of the Father and Son. ...read more.

In the Doctor's Surgery, fewer characters and no unnecessary conversations made a strong impact, focussing on reactions when the news is broken. This also meant it felt realistic. One problem with taking this approach could be that there was less opportunity for personalities to be conveyed to the audience through interaction with others. In my opinion, the impact of the news was greater because the personalities of the characters were not elaborated on. In our presentation, the story was slightly more complex, as more characters were involved. It focused on the situation in which the characters found out, as well as their reactions. This could be considered a disadvantage, as it took attention away from the impact of the bad news. ...read more.

An example of this was the Father's comment to his son " At least you'll get to have time off school" This and other reassuring comments (from the son also) gave the impression that Father and Son were hiding their emotions from each other, although clearly their fears were just below the surface. In contrast, the 'Mother-and-Daughter' relationship between Emma (Sarah) and Charmaine (Hannah) was honest and blunt; they communicated their opinions and emotions without restraint or much concern about upsetting the other. This behaviour is stereotypical of Mother and daughter relationships, as is the reserved behaviour of Father and Son. I think both presentations could be improved by varying the reactions of the family members. In the Doctor's Surgery, the Father and Son both react by suppressing their emotions, while in our presentation, all of Sarah's daughters reacted similarly, in anger. Emma-Jane Carvell ...read more.