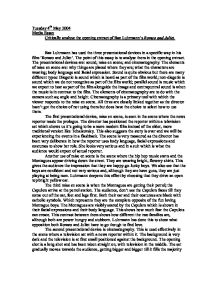 Tuesday 4th May 2004 Media Essay Critically analyse the opening extract of Baz Luhrmann's Romeo and Juliet. Baz Luhrmann has used the three presentational devices in a specific way in his film 'Romeo and Juliet'. The point of this essay is to analyse them in the opening extract. The presentational devices are: sound; mise en scene; and cinematography. The elements of mise en scene are: why things are placed where they are; what the characters are wearing; body language and facial expression. Sound is quite obvious but there are many different types: Diegetic is sound which is heard as part of the film world; non-diegetic is sound which we do not recognize as part of the film world; parallel sound is music which we expect to hear as part of the film alongside the image and contrapuntral sound is when the music is in contrast to the film. The elements of cinematography are to do with the camera such as; angle and height. Cinematography is a primary tool with which the viewer responds to the mise en scene. All three are closely linked together as the director hasn't got the choice of not using them but does have the choice to select how to use them. The first presentational device, mise en scene, is seen in the scene where the news reporter reads the prologue. The director has positioned the reporter within a television set which shows us it's going to be a more modern film instead of the older, more traditional version like Tchaikovsky. ...read more.

It also develops the feeling of magnitude that the film is going to produce. The second scene is the second shot of Verona city. Its shows the two families towers with a statue of Jesus in the middle. The camera pulls back to show various long shots of Verona. There are a lot of fast and erratic movements in this scene but the angle stays direct. The direct shot makes us feel involved in the film, yet, insignificant against it. The audience feels this because the story is portrayed to be so powerful and the rivalry between the two families is moving and vigorous. The scene is very harsh and inelegant as it's so hasty and changeable. The third scene is where the main characters are shown with their names and family. This is a parody from a soap or a program. Luhrmann uses it as it's a good way to show them to the viewers. It is a medium shot, where most of the body can be seen, and the angle is straight. The effect of this is that the audience sees that the two families are both very similar in wealth and distinction. We also see the characters families' names; this is very helpful when working out whether they are Montague or Capulet. The third presentational, sound, is used in the scene where we see the city, Verona, in erratic movements. ...read more.

They show the film is going to be modern; more so then the usual Shakespeare plays. They suggest the story will be told as a flashback, that the events have already been. To create the effect they have to merge together. Another example of how the devices compliment each other is when the main scene and the voice over begin. To make such a dramatic scene all three are needed. Mise en scene is used when the two towers are shown to show rivalry and division. There is also advertising showing the two families which supports this effect. Cinematography has fast movements and direct angle to show various long shots of Verona. This makes the audience see the enormity of the movie and the power and the harshness. Sound uses the diegetic noises like cars and helicopters along with the non-diegetic sound of the voice over. These and the parallel music create a sense of urgency and fear. All three together form a profound and strident scene which couldn't be produced with just one of the devices. The success of Baz Luhrmann's use of presentational devices is huge. Although the story of Romeo and Juliet is an old and aged film, Luhrmann engages the audience with a dramatic, romantic love story. Consequently the film is immensely successful and undoubtedly most of it is down to how he considered mise en scene, sound and cinematography. Naturally this essay couldn't include all scenes from the opening extract but there are the main ones down. Overall the film is overawing, overbearing and overflowing with hatred, rivalry and love. ...read more.