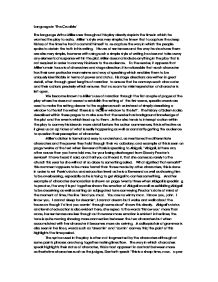 Language in 'The Crucible' The language Arthur Miller uses throughout his play clearly depicts the time in which he wanted the play to echo. Miller's style was very simple; he knew that to capture the deep history of the time he had to commit himself to re-capture the way in which the people spoke to detain the truth in his writing. His use of sentences and the way he structures them are also very simple, however with using such a simple style of writing he does not take away any elements of suspense within the plot. Miller does not include anything in the play that is not required in order to convey his ideas to the audience. To the reader, it appears that Miller's main focus is of characters and stage direction; it is noticeable that each character has their own particular mannerisms and way of speaking which enables them to be uniquely identifiable in terms of power and status. His stage directions are written in great detail, often through great lengths of narration to ensure that he conveys each character and their actions precisely which ensures that no room for misinterpretation of character is left open. ...read more.

A colloquial air of grammar is also seen in her lines, words such as 'dreamin' and 'comin' convey this; the point of this highlights the time period. The syntax used in the play is often not fragmented by the characters although at some points phrases are strung together making lines flow. The way in which characters speak highlights their status of character, this is most apparent in contrast between more authoritative characters such as the judges, Danforth speak "This is a sharp time, now, a pre-mixed time-we live no longer in the dusky afternoon when evil mixed itself with good an befuddled the world" opposed to that of lesser status characters such as Giles Corer, 'Hands off, d**n you, let me go!'. Archaic words are used throughout the play, although some words, such as 'Poppet' and 'Goody' - a form of address towards marries woman, are made up by Arthur Miller they do exhibit the late 17th century in which the play was set. Arthur Miller makes used of literary technique at different times in the play, techniques such as imagery and symbolism are not to be left unnoticed but are to instead be understood. ...read more.

The dialogue between them is awkward, stage direction such as when Proctor kisses Elizabeth she simply 'receives it' thus highlighting their strained relationship. A change in pace is also evident at different points of the play, markedly in times of tension; this change of pace ads to the realistic quality of the play. At times of tension characters often cut across other which suggests an air of urgency or depicts the anger of character; an example of this can be seen yet again when Abby and Proctor are speaking alone in act one, Proctor beings to call her 'Child' but is immediately retorted back to by Abby who with a flash of anger replies 'How do you call me a child!' change of pace is most frequently used in the courtroom scenes, illustrated on page one hundred and eight where Abigail repeatedly interrupts Danforth. 'The Crucible' is seemingly an accurate account of the time period in which it is closely written about, Miller is able to depict each character accurately through use of narration, language, stage direction and description. His detailed writing ensures that the audience and the reader understanding of the plot and characters; the language he uses paints a historically accurate society for the viewer which aids the believability and realism of Arthur Miller's work. ...read more.