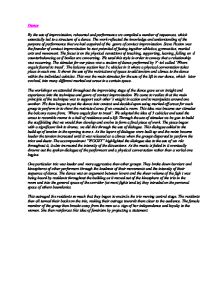 Dance - the use of improvisation.

Dance By the use of improvisation, rehearsal and performance we compiled a number of sequences, which essentially led to a structure of a dance. The work reflected the knowledge and understanding of the purpose of performance that we had acquired of the genre of contact improvisation. Steve Paxton was the founder of contact improvisation he saw potential of fusing together athletics, gymnastics, martial arts and movement. The focus is on the physical sensations of touching, supporting, leaning, falling and counterbalancing as if bodies are conversing. We used this style in order to convey that a relationship was occurring. The stimulus for our piece was a section of dance performed by V-tol called 'Where angels feared to tread'. The balcony section has 3 cubicles in it where a physical conversation takes place in each one. It shows the use of the restrictions of space to add tension and climax to the dance within the individual cubicles. ...read more.

The piece began with a significant link to drama; we did this through the use of dialogue. This dialogue added to the build up of tension in the opening scenes. As the layers of dialogue were built up and the noise became louder the tension increased until it was released as a climax when the groups dispersed to perform the trios and duets .The accompaniment "WOOZY" highlighted the dialogue due to the use of words throughout it, it also increased the intensity of the discussions. As the music is faded in it eventually drowns out the spoken dialogue of the performers and a physical conversation rather than a verbal one begins. One particular trio was louder and more aggressive then other groups. They broke down barriers and kinespheres of other performers through the loudness of their movements and the intensity of their sequence of dance. ...read more.

The men are resembled as the weaker sex and are bewildered by the departure of the women. To show their dependence they perform a sequence of motifs containing slow movements, which are often performed towards the floor. The women then encircle the men again and move further away this time before they turn out symbolising the vacuum between the sexes and also making sure that the audience could see all the performers. It was clear by the feed back given by the audience that they had understood the performances, the intention of the devised piece and they commented on the clarity of the movements, which made it easy to understand the story line .The audience also commented on our use of eye contact they said it made it easier to distinguish between the roles of the performers. It was reassuring to hear that our initial intentions and overall aim of the group piece had been a success and through this we learnt that through confidence, experience and trust physical barriers can be broken down. ...read more.