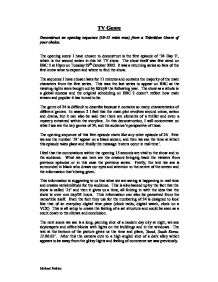 Deconstruct an opening sequence (10-15 mins max) from a Television Genre of your choice. The opening scene I have chosen to deconstruct is the first episode of '24 Day 2', which is the second series in this hit TV show.

TV Genre Deconstruct an opening sequence (10-15 mins max) from a Television Genre of your choice. The opening scene I have chosen to deconstruct is the first episode of '24 Day 2', which is the second series in this hit TV show. The show itself was first aired on BBC 2 at 10pm on Tuesday 29th October 2002. It was a returning series so fans of the first knew what to expect and where to find the show. The sequence I have chosen lasts for 11 minutes and contains the majority of the main characters from the first series. This was the last series to appear on BBC as the viewing rights were bought out by BSkyB the following year. The show as a whole is a global success and the original scheduling on BBC 2 doesn't reflect how main stream and popular it has turned to be. The genre of 24 is difficult to describe because it contains so many characteristics of different genres. In season 2 I feel that the main plot revolves around crime, action and drama, but it can also be said that there are elements of a thriller and even a mystery entwined within the storyline. In this deconstruction, I will concentrate on what I see are the key genres of 24, and the audience's perspective of these. The opening sequence of this first episode starts like any other episode of 24. First we see the number '24' appear on a black screen, and then we see the time at which this episode takes place and finally the message 'events occur in real time'. I feel that the connotations within the opening 15 seconds are vital to the show and to the audience. What we see here are the creators bringing back the viewers from previous episodes or in this case the previous series. Firstly, the text we see is surrounded in black who draws our eyes and attention to the centre of the screen and the information that's being given. ...read more.

We do also see that the hero's in this show have very dark tendencies and are obviously willing to do whatever it takes to achieve the results they want. The next stage in the sequence is of an unrelated girl running up stairs and jumping into an unmade bed. The girl is laughing and happy to be doing what she's doing, the camera then pans to the left where we see Kim Bauer, Jack's daughter, in her underwear washing and getting ready. We then find out that the little girl is hiding from her dad and it is suggested by the dialogue that this is Kim's child and the father her husband. When the father walks in the room Kim moves back into her en-suite bathroom where she was previously getting ready. From the body language of the two adults you begin to think that they are not married or in a loving relationship. The father carries on playing 'hide and seek' with his daughter and Kim look relieved that he is out of her bedroom. Kim and the child definitely have a strong relationship in this scene because Kim's reactions and emotions show this. When the girl enters the room Kim stops everything, smiles and wants to join in with the girl. When the farther enters however these emotions change, she is unhappy with him in the room, wants to hide the fact she isn't wearing many clothes but tries to act as if nothing has happened and goes back to what she was doing. The plot and storyline shifts again after this when the camera cuts to a scene of Palmer and his son leaving the river and getting into armoured cars in a convoy. We see soldiers with guns, men in suits and dark glasses and a woman who we assume to be one of the presidents aids. As they get into the car the president and his son are split up and get into separate vehicles both having their own guards and protection. ...read more.

Although the audience can link the earlier torture to this, the President is unaware of the lengths went to obtain it. This, as far as the audience are concerned, builds integrity in the character. The next sequence sees Palmer being shown photos of a known bomber who they believed was dead. We see these two characters in opposition to each other as one, Palmer, is the good guy trying to maintain peace, and the other, Mamood, is seen to be someone who wants to disrupt peace and cause harm. We also see binary oppositions in that Palmer is a wealthy American fighting for the best for the US and Mamood as an Arab looking to cause terror and b**b American soil. Palmer is handed a confidential folder containing information on the country supporting these terrorists, we as the audience and the rest of the room aren't given these details. This suggests that it is controversial as well as confidential and that only the president can know. In the background we see images of war and suffering as well as recent bombings carried out by this man. Again this can be identified with the thriller genre and the action drama because we don't know all the information of what's going on but we do know that violence and killing will be involved. As this sequence comes to a close we see the time '08:12:34', and 4 individual frames of other characters. The characters are Jack, Kim, Palmer and Mamood, this tells us that what we are about to watch has a multiple narrative which may or may not become unified as the story develops. The time also reinforces the suggestion of events occurring in real time although only 11 minutes have passed. Both these aspects are key signifiers of the series as a whole because they are used to push the narrative forward, reinforce the structure and help create the idea of realism in that other things are happening at the same time. Michael Perkins ...read more.