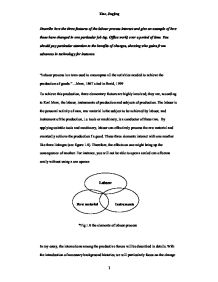 Describe how the three features of the labour process interact and give an example of how these have changed in one particular job (eg. Office work) over a period of time.

Describe how the three features of the labour process interact and give an example of how these have changed in one particular job (eg. Office work) over a period of time. You should pay particular attention to the benefits of changes, showing who gains from advances in technology for instance. "Labour process is a term used to encompass all the activities needed to achieve the production of goods."...Marx, 1867 cited in Barid, 1999 To achieve this production, three elementary factors are highly involved; they are, according to Karl Marx, the labour, instruments of production and subjects of production. The labour is the personal activity of man, raw material is the subject to be achieved by labour, and instrument of the production, i.e. tools or machinery, is a conductor of these two. By applying suitable tools and machinery, labour can effectively process the raw material and eventually achieve the production f a good. These three elements interact with one another like three linkages (see figure 1.0). Therefore, the effects on one might bring up the consequence of another. For instance, you will not be able to open a sealed can of beans easily without using a can opener. Labour Raw material Instruments *Fig 1.0 the elements of labour process In my essay, the interactions among the productive forces will be described in details. With the introduction of necessary background histories, we will particularly focus on the change of this interaction throughout the industrial revolution. By taking an example of British textile industry, I will discuss the cause and consequence of change in labour process. ...read more.

Moreover, clustering of macro-invention gradually lead the original labour intensified manufacturing to capital intensified manufacturing represented by relatively lower labour-capital ratio and the massive usage of machines in production. Before the development of the machines, the textile industry had some coordinating problems. It took four spinners to keep up with one cotton loom, and ten persons to prepare yarn for one woollen weaver (Kreis, 2001). Spinners were busy, but weavers often had to be idle for lack of yarn. The conflict was even sharpened when John Kay invented flying shuttle, which speeded up the pace of weaving. Between 1740s and 1780s most of the textile processes were mechanised (detail see Appendix 1). By the beginning of the eighteenth century in England, the use of machines in manufacturing was already widespread. As a result, the productivity took off and increased dramatically (see Appendix 1). Meanwhile, technological process which progress as a consequence of specialisation extended the level of labour division. As a result, duties of labourers became simpler on one particular job, such as turning on an automatic loom or monitor the regulation on the loom. On one hand, it boosted the level of employment within the industry (the consequence of labour division). On the other, hand-brain distinction leads to a massive deskill of labour. The increase in employment is only an increase in manual workers who can only contribute their labour power but not the skill. In fact, deskilling labour often signs the unemployment in skilful workers and the deduction of labour's worth. ...read more.