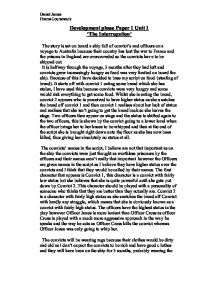 Development phase Paper 1 Unit 1 'The Interrogation' The story is set on board a ship full of convict's and officers on a voyage to Australia because their country has lost the war to France and the prisons in England are overcrowded so the convicts have to be shipped out. It is halfway through the voyage, 3 months after they had left and convicts grew increasingly hungry as food was very limited on board the ship. Because of this I have decided to base my script on food (stealing of bread). It starts off with convict 1 eating some bread which she has stolen, I have used this because convicts were very hungry and some would risk everything to get some food. Whilst she is eating the bread, convict 2 appears who is perceived to have higher status as she snatches the bread off convict 1 and then convict 1 realises about her lack of status and realises that she isn't going to get the bread back so she leaves the stage. Two officers then appear on stage and the status is shifted again to the two officers, this is shown by the convict going to ...read more.

The officers have the highest status in the play however Officer Jones is more lenient than Officer Cross as officer Cross is played with a much more aggressive approach in the way he speaks and the way he acts as Officer Cross kills the convict whereas Officer Jones was only going to whip her. The convicts will be wearing rags because their clothes would be dirty and old as I don't expect the convicts to be rich and have good clothes and they will have been on the ship for 3 months, probably wearing the same clothes everyday. The Officers however will be wearing a uniform to give the characters a sense of control and order over the convicts because the officers have the higher status. The only props that will be used are the whips, the knife and the bread. The bread is eaten by the convicts, not only that but it plays an important part in the script as the bread has been stolen from the officers table and this results in the death of a convict. The knife also plays a key role in the script as it is used to kill the convict. ...read more.

an outline of a boat or a drawing of the ocean around the sides and the back of the stage. Throughout the play I will keep to having low level lighting because this give the effect that the hulks on the ship was a dark and gloomy place also because of the fact that there is no scene change in the script. If I was to add any extra lighting, I might introduce a spotlight in the centre of the stage for most of the action to happen there, thus giving the effectiveness of the small narrow space on the ship. The message that I am trying to communicate to the audience is the change in status between different classes of people. In my script there is an upward change in status because it starts off with a convict with barely any status and finishes with an officer of the highest status killing one of the convicts. This can also be reflected in real life so people may think about their own society after watching it for example we, the public have barely any status and it leads up to the queen having the highest status. ?? ?? ?? ?? Daniel James Drama Coursework ...read more.