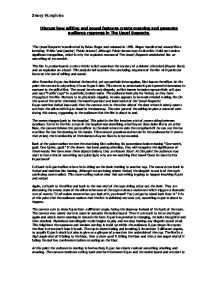 Discuss how editing and sound features create meaning and generate audience response in The Usual Suspects. 'The Usual Suspects' was directed by Brian Singer and released in 1995. Singer has directed several films including 'X-Men' and (earlier) 'Public Access''. Although Public Access was his first film it did not receive significant recognition, which is why the explosive success of The Usual |Suspects established him as something of a maverick. This film is predominantly a crime thriller which examines the mystery of a sinister crime-lord (Keyser Soze) and an explosion on a boat. This analysis will examine the concluding sequence of the film with particular focus on the use of editing and sound. After Detective Kujan has finished his forceful, yet sympathetic interrogation, Kint leaves the office. At this point the camera is subjective; it is on Kujan's side. This serves to accentuate Kujan's powerful demeanor in contrast to the pitiful Kint. The sound here is only diegetic, as Kint leaves he looks reproachfully at Kujan and says "f****n' cops" in a pathetic, broken voice. The audience feels pity for Verbal, as they have throughout the film. Not only is he physically crippled, he also appears to be weak-minded making him (in the eyes of the other criminals) the least important and least useful of the 'Usual Suspects'. ...read more.

The camera cuts to show Kujan from a different angle, facing the doorway instead of the back of the room. The camera very slowly starts to zoom in towards the notice board. Then it cuts back to let us see Kujan again and slowly starts zooming in towards his face. Kujan's expression is changing, he looks thoughtful and then shocked. Mysterious non-diegetic music begins to play and we stop hearing any diegetic sound at all. This heightens the suspense and tension starting to build up within the audience. Kujan drops his cup on the floor but we don't hear it break. The cup is shown falling and breaking 3 times from 3 different angles, to amplify Kujan's shock but also to give us a glimpse of a word on the underside of the cup. The first is a high angle shot of it falling to the floor, then a close up of it hitting the floor and then a low angel shot of it falling the last few centimeters before smashing on the floor. At this point the audience is starting to feel excited, Kujan has clearly realized something shocking and amazing. The camera continues cutting back and forth between Kujan and the notice board and we start to hear a voiceover of Verbal telling his story to Kujan. ...read more.

as a side-shot shows him get into a car with Kobayashi. The camera turns to watch the car drive round the corner and comes to rest on an agitated Detective Kujan as the voiceover repeats Verbal's remark from earlier in the film. "The greatest trick the devil ever pulled was convincing the world he didn't exist." Finally we come back to a scene from earlier in the film, Verbal says "and like that, he's gone" and as he says "he's gone" the screen goes black. I feel that this is an extremely effective ending as it provokes many different responses in the audience. The montage sequence is particularly effective, as a variety of different editing and sound techniques are used to provoke a strong audience response. Such as when Kint is first leaving the editing is slow-paced and casual, lulling the unsuspecting audience into a false belief of the film coming to a rather anti-climactic end. However, this is turned on its head as the editing gets faster and faster during and after the montage sequence, amplifying the shock of the truth. Sound is also used very effectively. The voiceovers from earlier in the film which are used in the montage not only draws the viewer's attention to previous statements made in the film, but the overlapping also helps to promote the feeling of bewilderment and shock at the discovery. Stacey Humphries ...read more.