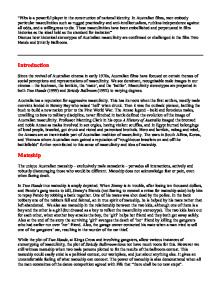 Discuss how historical stereotypes of Australian masculinity are confirmed or challenged in the film Two Hands and Strictly Ballroom.

"Film is a powerful player in the construction of national identity. In Australian films, men embody particular masculinities such as rugged practicality and anti-intellectualism, ruthless independence against all odds, and a willingness to die. These masculinities have been embellished and perpetuated in film histories as the ideal held as the standard for imitation" Discuss how historical stereotypes of Australian masculinity are confirmed or challenged in the film Two Hands and Strictly Ballroom. Introduction Since the revival of Australian cinema in early 1970s, Australian films have focused on certain themes of social perceptions and representations of masculinity. We see dominant, recognisable male images in our cinema - the bushman, the larrikin, the 'mate', and the 'battler'. Masculinity stereotypes are projected in both Two Hands (1999) and Strictly Ballroom (1992) to varying degrees. Australia has a reputation for aggressive masculinity. This has its roots when the first settlers, mostly male convicts landed in Botany Bay who raised 'h**l' when drunk. Then it was the outback pioneer, battling the bush to build a new nation prior to the First World War. The Anzac legend - bold and ferocious males, unwilling to bow to military discipline, never flinched in battle defined the evolution of the image of Australian masculinity. ...read more.

In Two Hands, in the scene just before Jimmy and his friends rob the bank, his friend keeps saying how fun robbing the bank will be. Later in the bank when Jimmy's friend hits his head and becomes unconscious, that is another form of unintended larrikinism, as the bank robbery which was meant to be a serious, dramatic event has turned into a joke. The two street kids who stole money, and the group of gangsters are larrikins with criminal intentions in the film In Strictly Ballroom, Scott's refusal to stick with the normal, Federation steps is an example of larrikinism of the trivialised form - anti-authority. Even though he knows that winning the Pan Pacific while dancing those steps is impossible, he still goes through with it all the way to the end. He is the 'battler' against all odds. The only thing that makes him hesitate is the need to make his dad proud, which is the same kind of loyalty and mateship found in the masculinity stereotype. Challenge (battler) The stereotype masculine is highly competitive. They want to be the best fighter, fastest shearer, best shot with a gun, best in sport, biggest drinker, and prized titles. ...read more.

Australian gangsters are stereotyped as big and tough, and not very bright - of average intelligent. But even though Pando's gang are all of these things, they can be seen playing 'intellectual' games such as Scrabble and Chess. Of course it is not possible to tell to what degree they have mastered these games. But they are still of average intelligence to be shot dead by the 'girl", and x*x used bullets that have been soaked in the washing machine. In Strictly Ballroom, the male characters are not portrayed to be not bright. Scott as we know is a dance teacher, and a professional dancer. Even if the other characters are not as bright as he is, it is now obvious. Conclusion Both films Two Hands and Strictly Ballroom stereotype masculinity. Two Hands, based on the rough living at Kings Cross with a gangster plot stereotype the typical masculinity - criminal culture, swearing, rough, tough, ruthless gangsters, fighting and boxing, drinking beer, exercising, masculine attire, mateship, larrikinism, meeting at pub, robbing the bank, and willingness to die. Strictly Ballroom, with a ballroom and romance plot is more difficult to project the male stereotype. However even in this difficulty area, it manages to still capture the following masculine traits - mateship, trivialised larrikinism, physical apperarance, durnkenness, determination to win the ballroom dancing championship using new steps -the macho Spanish pasodoble. ...read more.