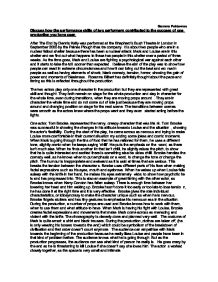 Gemma Pohlowan Discuss how the performance skills of two performers contributed to the success of one production you have seen After The End by Dennis Kelly was performed at the Shepherd's Bush Theatre in London in September 2005 by the Paines Plough theatre company. It is about two people who are in a nuclear fallout shelter because there has been a nuclear attack. Mark and Louise are in this shelter and we find out what happens to these two people in this shelter over a period of three weeks. As the time goes, Mark and Louise are fighting a psychological war against each other and it starts to take the toll sooner than expected. I believe the aim of the play was to show how people can react in extreme circumstances and how it can bring out the best and worse in people as well as having elements of shock, black comedy, tension, horror, showing the gain of power and moments of bleakness. Roxanna Silbert has definitely thought about the pace and timing as this is reflected throughout the production. The two actors play only one character in the production but they are represented with great skill and thought. They both remain on stage for the whole production and stay in character for the whole time, even during transitions, when they are moving props around. ...read more.

During the production, a number of props are used and Brooke knows how to work with them, when to use them and what attitude to have. When Mark is having his fight with Louise, Brooke creates facial expressions and movements that make Mark come across as menacing and violent with the knife. The choreography is cleverly done and planned very well. The costume of Mark is quite smart: a shirt and black trousers. During the production, clothes are taken off, (he is only wearing his boxers towards the end) which could be symbolism of the breakdown of civilisation and that order doesn't count anymore. The audience can empathise with Mark towards the beginning of the production because he really likes Louise and people have been in that kind of problem before. The audience knows what he is going through. But as the production progresses, the audience can see what kind of person he really is. He goes crazy by the end as he is threatening to kill Louise if she doesn't say she loves him. The actors worked closely together, as the space is very small and intimate. Gemma Pohlowan Kerry Condon played the character Louise who is in the nuclear fallout shelter with Mark. Condon uses dramatic timing and awareness of space very well, she works well with Brooke to make sure timing is right, and that each pause is just right in length. ...read more.

This is reflected on stage as they are capable of being intimate with each other and be distant. The actor/audience relationship varies throughout the production. There are times of comedy, which builds the audience as being a funny production until the seriousness brings them back to reality. Tension is built right through the production, with the silences, pauses, reactions to other character and movement. This had the audience on edge, wondering what would happen next. People were excited, anxious, curious, even scared of what would happen next to Mark and Louise. There were definite moments of shock and disgust especially with the r**e scene. The audience was so close to the action it was as if they were part of the bunker. Overall, I felt both actors performed with great thought and skill. They were both capable of being flexible when necessary and able to use what they were given such as time, space and props. They were able to play with the audience in different parts of the production. Each of the characters had had a lot of consideration on how they should be portrayed and I think it worked as the audience reacted to it. I thought it was very impressive, as they had to be on stage for an hour and a half and perform something that is not easy to do. The production is well worth seeing and I'm glad I did see it as it now allows me to think of acting in a different style. ...read more.