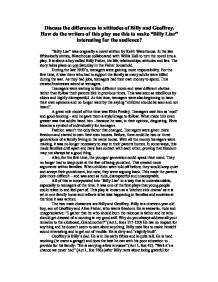 Discuss the differences in attitudes of Billy and Geoffrey. How do the writers of this play use this to make

Discuss the differences in attitudes of Billy and Geoffrey. How do the writers of this play use this to make "Billy Liar" interesting for the audience? "Billy Liar" was originally a novel written by Keith Waterhouse. In the late fifties/early sixties, Waterhouse collaborated with Willis Hall to turn the novel into a play. It is about a boy called Billy Fisher, his life, relationships, attitudes and lies. The story takes place on one Saturday in the Fisher household. During the late 1950's, teenagers were gaining more responsibility. For the first time, it was them who had to support the family as many adults were killed during the war. As they had jobs, teenagers had their own money to spend. This created businesses aimed at teenagers. Teenagers were starting to like different music and wear different clothes rather than follow their parents like in previous times. This was seen as rebellious by elders and highly disrespectful. At this time, teenagers were also beginning to have their own opinions and no longer went by the saying "children should be seen and not heard". A great role model of the time was Elvis Presley. Teenagers saw him as 'cool' and good-looking - and he gave them a style/image to follow. What made him even greater was that adults hated him - because he was, in their opinion, disgusting. Elvis became a symbol of individuality for teenagers. Fashion wasn't the only factor that changed. Teenagers were given more freedom and started to own their own houses. Before, there could be two or three generations of a family living in the same house. ...read more.

He owns a garage, which he tries hard to keep running smoothly. Geoffrey didn't have a good education, "well it's a chance we never had!" (Act3, line 766) so, he wants to give Billy the best chance in life he can. That is why he sacrificed so much to enable Billy to go to grammar school. He believes Billy has wasted his education and could do much more. He would like Billy to go into the family business but knows this won't happen: "Who do you thinks going to run this b****y business when I'm gone?" (Act3, line 720) He wants Billy to work harder and have more responsibility. Through his hard work, Geoffrey has managed to raise his family from working class to middle class. He is more committed to his job than Billy and wants him to be less idle. Geoffrey again believes in honesty and hard work. The next principle Billy and Geoffrey disagree on is elders and traditions, as Billy has no respect for his elders. He is very sarcastic and rude: "I suppose that she who's coming for her tea is Barbara and she who wants to tell her is Mother and..." (Act1, line 150) He thinks he is better than them and doesn't see them as much as a threat. Any punishment he is given, he ignores, which his parents think is very disrespectful. Billy doesn't want to be like the elders. Before 1950, children were very similar to their parents but Billy is the typical teenager of the late 1950's. He is trying to rebel and have his own opinions. ...read more.

We are led to believe that Billy will go to London and start a new life but, in the end, he returns home to continue with his lazy, untruthful ways. Therefore, implying that Billy will probably never grow up. The audience feels unsatisfied with the ending but the play does maintain its high level of entertainment as it has an anti-climax ending. This ending cleverly reflects Billy's personality. The ending shows the battle Billy faces about independence and the security of his family. This proves that, although Billy thinks he has grown up, he is still actually too immature to make it alone; a feeling which many of the viewers may relate to. Billy is a typical teenager in the 1950s and Geoffrey is a typical parent. Both characters are opposites and this is what children wanted; to be as different from their parents as possible. This is still the same today and so, the play is still enjoyable now as it is still relevant. The lies are so far fetched that it is still entertaining and, although we no longer use some of the swear words, we still understand what the characters mean by them. This play sums up the change from children being exactly the same as their parents (before the 1950s) to children wanting freedom and independence (after the 1950s). It is put in a fun, light hearted play which deals with serious issues in society at the time - issues which have been highlighted by the writers' use of structural, linguistic and dramatic techniques. This is an enjoyable play to read and watch as it is very lively and entertaining - even today, some half a century after it was written. ...read more.